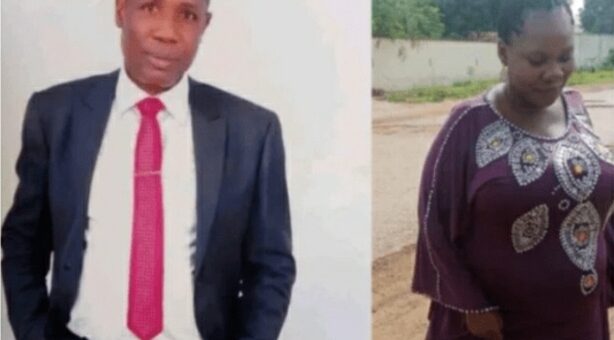 Founder and leader of Victor Church, Folayemi Richard has reportedly beaten his pregnant wife, Odunola to come over a little misunderstanding.

The Informant that first broke the s tory reported the pastor’s wife as saying the incident occurred in January 2021 when their wedding was three months old and her pregnancy was a month old.

“Last year, September 26, we got married, and we’ve been living together as husband and wife. When our wedding was one month old, that was when a terrible crisis occurred. We had a disagreement.

Suddenly, he ordered me to stand up and that he would take me to a hospital, where he would dump me. He started insulting my parents; I cautioned him. He slapped me and began to beat me.

He got a cable wire which we use for speakers in the church and beat me. I started shouting for help. I became so weak. I dashed out of the house; he followed me and started dragging me on the ground, saying he did not want the marriage again.

At this time, people had already gathered and were begging him. He locked me out and went to my parents.

When he came back again, he ordered me to leave his home,” she narrated. Odunola has complained to the National Human Right Commission to seek justice over the matter. She also alleged that her husband had denied her access to move her belongings from the house. She added that her certificates and other valuables are still in the house.