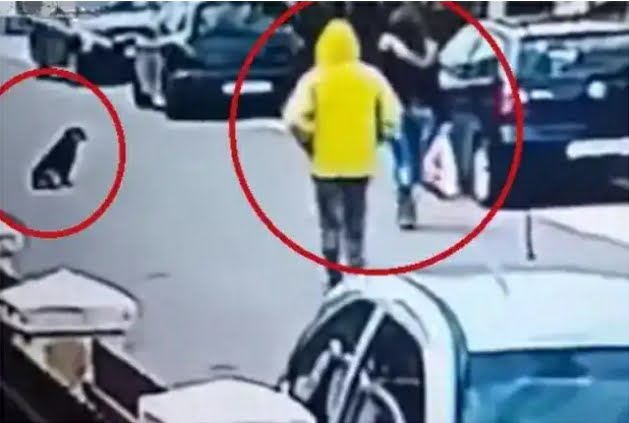 The dog’s reaction after a woman is robbed by a shady character is both epic and heartwarming.

If you ask me, the dog is a vigilante, and it was in the right position at the right moment when it saved the woman from losing her possessions to a street criminal.

We don’t know where the event occurred, but CCTV footage shows a young man with ‘evil’ intents wandering through the streets and attacking a young woman who was carrying some stuff in a nylon bag and her handbag.

The dog is seen sitting comfortably in the middle of the road as he watches the woman walk by, but as the man in the hoodie walked by, it got up and followed him without his knowledge, as if the dog had an intuition that something horrible was about to happen, which would be instigated by the man.

MORE:  Never Look Down On People You Think Have No Material Possession- Reno Omokri

The man tried to take the woman’s handbag while following him slowly on the man’s blindside, but he was unsuccessful as the woman battled with him. Meanwhile, the dog barked at the man and attempted to jump on the robber, causing him to flee because the dog was making a racket and drawing the attention of nearby neighbors.

Indeed, social media users praised the dog for acting as a hero when it was needed the most.