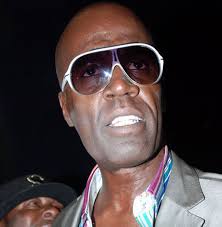 Aaron Robin Hall III is an American recording artist, songwriter, and record producer. Hall rose to prominence in 1988 as a member of the R&B and new jack swing group Guy, which he founded in the late ’80s along with Teddy Riley and Timmy Gatling, who was later replaced by Hall’s brother Damion Hall.

In 1988, he released his debut album (along sides his group) which went on to sell over a million copies being certified platinum. Hall led the group in songs like “Groove Me”, “I Like” and “Piece Of My Love”.

Aaron is born of African-American and Puerto Rico descent. He is named after his father Aaron Hall II who is a prominent New York Pastor. His mother, Johnella Romeo Hall died in a car accident on Christmas when Aaron’s career in RnB just began.

Aaron entered a relationship with model and dancer Gloria Velez when he was in his 30s. Gloria appeared in many of Aaron’s music videos and started dating him when she was 16 years old. She then got pregnant with his child and gave birth to Aaron Hall IV when she was 17 years old. The two got into a highly public breakup and Velez got full custody of their son on claims that Aaron was a ‘deadbeat dad’.

In 1994, Aaron lost his first son who was to be named Aaron during birth. It was so devastating to him he released a song called, I Miss You, dedicated to his late son, which speaks to his listeners on the death of loved ones. He then got another son with model Gloria Velez and they named him Aaron Hall IV.

Here, we have taken our time out to highlight some of the major biodata of the legendary R&B star.

Aaron has an estimated net worth of $3.4 million dollars as of 2021. This includes his Assets, Money, and Income. His primary source of income is his career as a soul singer and songwriter. Through his sources of income, Aaron has been able to accumulate a good fortune but prefers to lead a modest lifestyle.

As a solo singer, Hall’s hits include the #1 R&B single, Don’t Be Afraid, from the Juice soundtrack in 1992. Also on the popular videogame Grand Theft Auto: San Andreas, playing on New jack swing radio station CSR 103.9, the original and the remix of Don’t Be Afraid was produced by Hank Shocklee from The Bomb Squad, who also produced Public Enemy’s music.

His Top 3 single, I Miss You, from his solo debut in 1993, reached #2 on the R&B chart and later peaking at #14 on the Billboard Hot 100, becoming his biggest pop hit. In the spring of 1994, Hall recorded the song, Gonna Give it to Ya with Jewell from the soundtrack to the movie Above the Rim, starring Tupac Shakur and Duane Martin.

Aaron Hall was a professional dog trainer who would apparently come to your home to train your dog. Sure that sounds pretty normal, but what’s interesting is that Aaron shows up to suburb, USA rockin’ a pimp suit and pimp hat, to train unruly dogs of random people in need of dog help…I kid you NOT!

What’s impressive is that Aaron is very good at training dogs and it’s even more impressive that he literally trains them in many languages, including Vietnamese, Spanish, German and more. We’re not sure if he still has this side hustle, but about 5 or 6 years ago, he had a brief reality show called “Aaron Hall’s Dog Rehab.”

How Old is Aaron Hall?

How Tall is Aaron Hall?

Aaron is a man of average stature. He appears to be quite tall in his photos and anything to go by in his surroundings. Details regarding his actual height and other body measurements are currently unavailable but we will update upon knowledge.

How Much is Aaron Hall Worth?

Aaron has an estimated net worth of $3 million dollars as of 2020. This includes his Assets, Money, and Income. His primary source of income is his career as a soul singer and songwriter. Through his sources of income, Aaron has been able to accumulate a good fortune but prefers to lead a modest lifestyle.

Aaron is alive and in good health.

Who is Aaron Hall?

Aaron Hall is an American soul singer and songwriter. He is a current member of the group Guy, which he founded in the late 1980s.