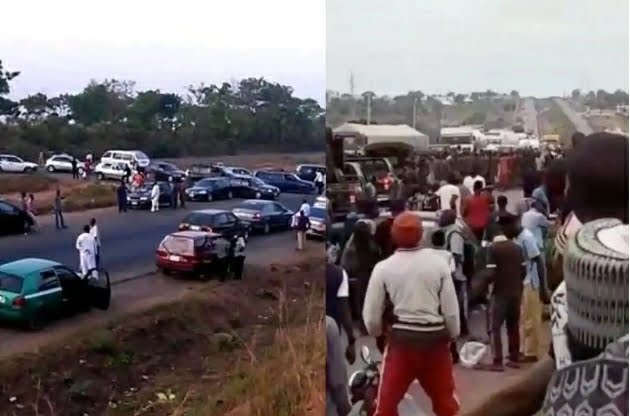 The Abuja-Kaduna highway was blocked by aggrieved resident following the constant attacks by bandits in their community.

According to reports, on Friday night, June 18, a 13 year old girl was killed by bandits and this angered the residents.

They took to the streets of Abuja-Kaduna highway to expressed their anger. Per reports gathered, the protesters from Anguwar Magaji, consisted mostly of youths and women, some of whom were half naked.

As early as 7:30am the road was was blocked and travelers were barred from continuing their journey.

Another reports that was gathered suggested that the house of the Village head was stormed by bandits and his family and other persons in the community were kidnapped.

Speaking to Tribune, Bala Johanna, a resident of the community said that the resident can no longer visit their farms due to fear of being attacked.

He said: “The most annoying is they followed us to our houses and collect ransom from us.”

He continued: “They killed a 13-year-old girl, a security man in the village as well as abducted other residents including the family of the village head.”

“Some of the women are half-naked. The soldiers were just begging them to leave the road but the men cheered them on from the roadside.”

Residents of Sabon Gaya, one of the towns in Chikun LGA, Kaduna, who were attacked near the NYSC camp along the highway a few days before the death of the 13-year-old girl, wept over the enormous flight from the area due to persistent attacks and abductions by the bandit.

A resident bemoaned the lack of security, stating that bandits went from house to house abducting a Yoruba trader and her children, then fleeing with a lady and her wedded daughter.

“The bandits wanted to abduct the newlywed daughter but the women resisted, insisting she was her only child and will not bear the brunt of losing her.So the bandits went with both mother and her daughter,” the resident said.

Below is a video of the demonstration by residents.

After receiving a tip from a church member, we kidnapped Deeper Life Pastor (Video)

After receiving a tip from a church member, we kidnapped Deeper...