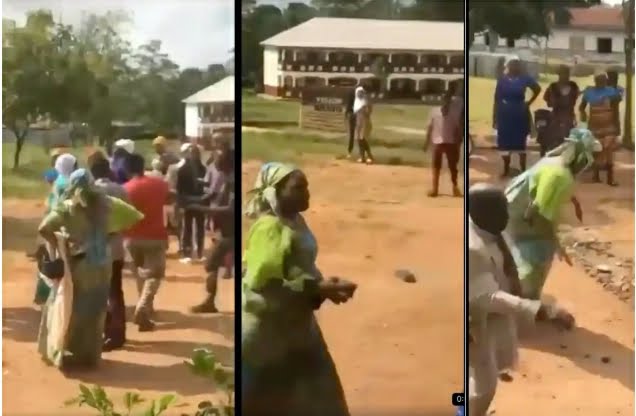 A lady led a gang of hoodlums into Jericho High School to punish a teacher who had “lashed” her child.

A Facebook user, Isaac Fayose, shared the video that was making the rounds online with the caption:

“A woman brought thugs to Jericho High School in Ibadan to assault teachers for disciplining her child.”

In the footage, the mother, clad in a two-piece Ankara suit, is seen attempting to throw stones at one of the teachers who attacked her for bringing thugs into the school.

The tragedy has elicited no response from the authorities.

Take a look at the video below.

MORE:  The Statement Made By The False Prophet Made Me Do This – Shatta Wale Finally Speaks From His Hideout

Oladoyin Falodu commented, “With this clip, I see….the instructor in question is really aggressive, He was the first to even assault the so-called thugs, think what he might have done to their child if he could be this vicious…. The title of Teacher does not imply that everyone who wears it is sane; it is only a description of what someone does, and that someone could be an animal in disguise… Make an informed decision about your children’s education.

Iya wereey leleyi oo, when me dey school, na my mum go even thank the teacher for beating me self, wrote David Olaleye Obafemi.

My son has been complaining for over a week about a teacher in his school who beats him on the head daily, he said the teacher is not in his class, she comes from her class to beat him, not even on his hand but on his head, yesterday he complained again, I had to send a message to the school’s owner, my son comes home tired and complaining of headache, he even said he won’t go to the school again.