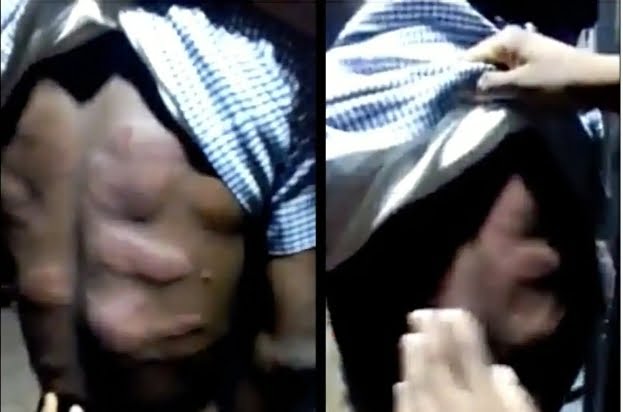 The marks on a teenage boy’s back after he was allegedly whipped by a school officer are visible in a video shared on the internet.

The child, an SS3 student at Nigerian Navy Secondary School in Abeokuta, Ogun State, is shown in the video displaying others his wounded back as a result of the brutal whipping.

The footage was shared by Facebook user Vivian Madu.

“This barbaric and degrading punishment was meted out to an SS 3 student of Nigerian Navy Secondary School Abeokuta by a Sub Lt Rollins Okoji under the watchful eye of a female Commandant Mrs Jecinta Uche Asetuebube,” she said in the caption. The Commandant initially rejected the video since the victim’s nickname is NDA, but additional research found that it occurred before the end of the previous term.”

The command of the Nigerian Navy has replied to the clip.

The footage was handed to the school’s management by a parent who could not identify when the incident occurred or who was involved, according to Commodore Suleiman Dahun, the Nigerian Navy Director of Information.

A preliminary review revealed that “the event occurred two sessions ago” and that it was handled administratively, according to Dahun.

“For the avoidance of doubt, a further inquiry into the incident is underway,” he said, adding that the Nigerian Navy was aware of the need to maintain discipline in its institutions without resorting to unusual tactics.