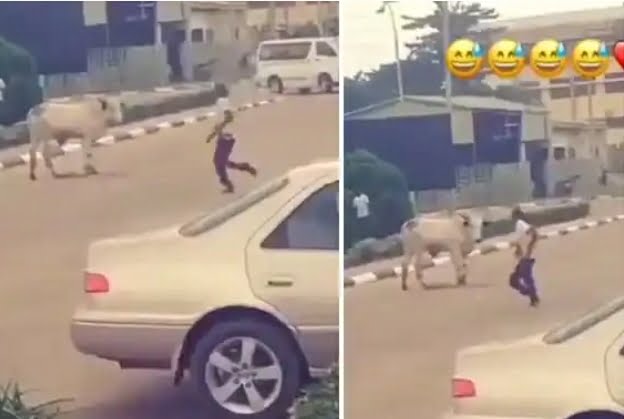 Wothappen.com has discovered a humorous video depicting a herdsman fleeing for his safety after attempting to manage his rogue cow.

The cow had reportedly broken out of camp and was wandering around the neighborhood with a rope around its neck, indicating that it wanted to leave, but the owner would not allow it.

The man who was trying to get a grip of the cow’s rope and guide his movement back to its place was pursued by the cow in a video posted online.

However, his quick legs saved him as he outruns the cow; otherwise, he would have been trampled by the animal and could have died as a result.

Meanwhile, Seyi Tinubu, the son of All Progressive Congress National Chairman Bola Tinubu, has urged artist Davido to hold a free concert for his fans.

This comes after David Adeleke, also known as Davido, received almost 100 million naira from his fans and pals just hours before his birthday party.

In response, Seyi Tinubu, via his Instagram story, stated that Davido has begun a new wave, and that because he has been showered with affection by his fans, it is noble of him to thank them with a free performance.

‘Davido, you have begun a new wave…’ wrote Seyi Tinubu.

Is it necessary for me to call you out? You must provide a free performance to your followers… 30BG‘