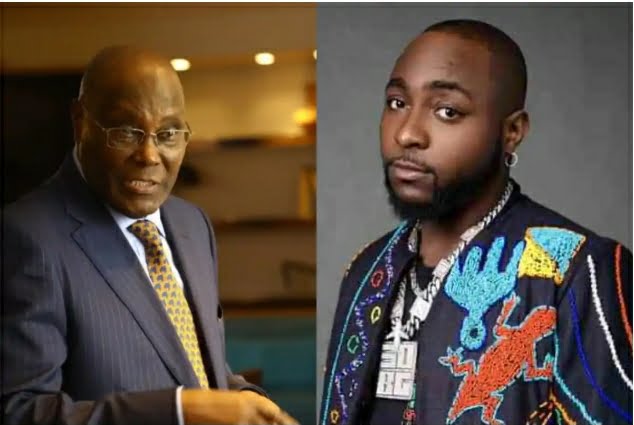 Atiku Abubakar, Nigeria’s former Vice President, has expressed interest in the good job Davido is doing for the Nigerian people.
According to Atiku, Davido has demonstrated that he is always there for his people, in both good and bad times.

In a post on his Instagram page, Atiku thanked Davido for making helping others a priority by deciding to give away all of the money he had received as birthday gifts from his friends.

“Dear Davido, thank you for making the upliftment of people a cornerstone of your endeavor,” Atiku wrote. I’d want to join your family, friends, and millions of fans in wishing you a happy birthday.

“I wish you many more years of excellent health, award-winning music, and, most importantly, the ability to lift people,”

In other developments, Reno Omokri, a former presidential adviser, claims that God favors those who feed those who are wealthier than them.

He declared on his Instagram page that it is not wise to spend money on individuals who are wealthier than you, but rather to feed the needy in order to be blessed.

MORE:  Nana Aba The Queen Elizabeth Of Ghana Teaches Us The English Word For Kontonmire And Others – Video

“There’s nothing wrong with donating money to people,” he wrote. But don’t go into debt to show your loved ones how much you care. Going into debt to attempt to fit into a clique that already knows who belongs and who doesn’t is far worse. Use your money to get affluent rather than to attract attention!