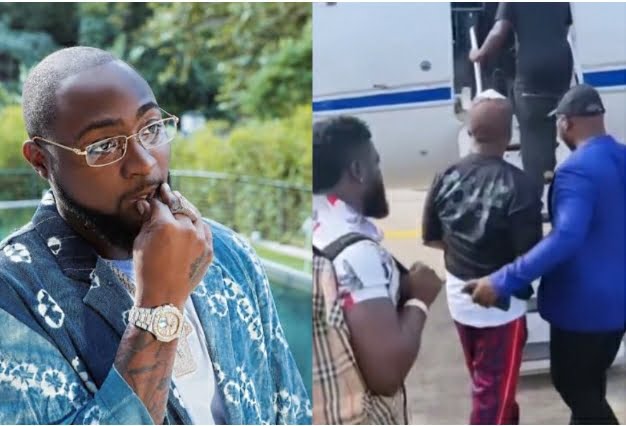 A video showing the moment the bodyguard of Nigerian singer, Davido pushed away an airport official who wanted to meet Davido whiles making his way into his private jet has caused an uproar on social media.

Davido was embarking on a trip with his DMW Records crew when one of the officials at the airport who is a fan tried moving towards Davido to taken snaps with him but for the vigilance of the bodyguard who was doing his work, his conquest was cut off in a rudely and humiliating manner as the bodyguard pushed him away.

Reacting to the video, netizens condemned Davido’s security apparatus and also slammed the singer for not intervening in the matter which indirectly means he supported his bodyguard’s action.

However, some social media users defended the security man’s actions as they pointed to the fact that he is doing exactly what he is paid for but a user identified as @slim_currency said the airport official was treated this way because he does not have money.

See some reactions below;

In other news, Big Brother Naija Season 6 ‘Shine Ya Eye’ finalist and winner, Whitemoney have lamented over how his social media pages has been flooded with messages from ladies proposing to him and making advances at him in a bid to start a romantic relationship with them after winning the reality show.

In an interview he granted on radio monitored by kemi filani news, Whitemoney born Hazel Onou who bagged 30million naira cash, a two-bedroom apartment situated in Lekki, a 4-wheel drive SUV and other juicy gift items as winner of BBNaija said that he has been single for almost 6 years now with the influx of girls in his DM, he would gladly buy love in the market if some is available.