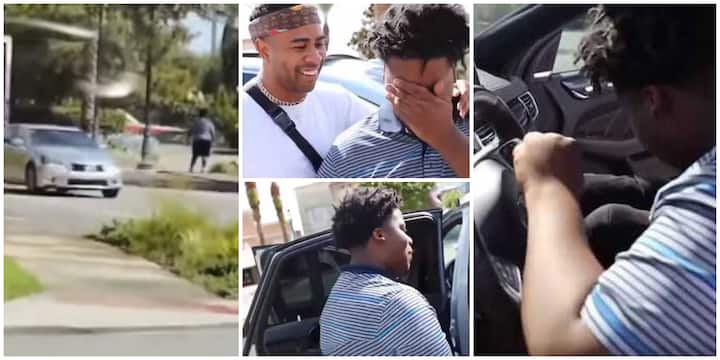 A boss rendered his worker jobless one minute and employed the other minute in a life-changing employer-employee encounter.

The boss, a content creator by profession, faked being furious with his employee who is a cameraman in order to pull off a surprise.

The boss was vexed that the cameraman, Quis, showed up to work late and slammed him, questioning his seriousness with the job.

He questioned the worker’s seriousness with the job.

The employer continued to talk down on the poor cameraman who kept on apologizing, unaware of what was brewing for him.

After a series of arguments back and forth, the boss told the stunned worker that he was fired.

From being jobless to owning a car.

Shocked by the news, the worker pleaded with the boss for a second chance promising to turn a new leaf.

MORE:  “Very Soon The Truth Will Be Out For Y’all To See Clearly” – Tuface Idibia’s Babymama Pero Reacts As 2face Shares Video With Annie (VIDEO)

Quis added that it was proceeds he got from the job that he uses in catering for himself and his family and pleaded with the boss not to take it away to no avail.

Despite the pleas, the boss’ decision was final and ordered Quis to exit the premises.

The boss then trailed Quis as he trekked back home and informed him that the car he rode in was now his.

In the video shared by Pretty Boy Fredo on Facebook, the young worker was stunned and burst into tears.

The boss while consoling him extolled the worker for his hard work, stressing that it was well deserved.

MORE:  Regina Daniels Calls Out Kayamata Seller Jaruma – Says She Has Never And Will Never Use Her Products

“Quis is really a good kid and am happy you made him feel being good pays,I wish I can get such treatment sometimes to show someone truly see how hard it is to be a good person.”
Ella Bills said:

“You were too harsh. It doesn’t matter what you wanted to give him. I nearly cried. That was too much. There are so many ways you can surprise someone but don’t break the person down before.”
Sheena Scott commented:

“Man this is the best thing I’ve seen all day. Y’all have me here in bed crying all the way in Jamaica. You have a good heart man, god bless you!”