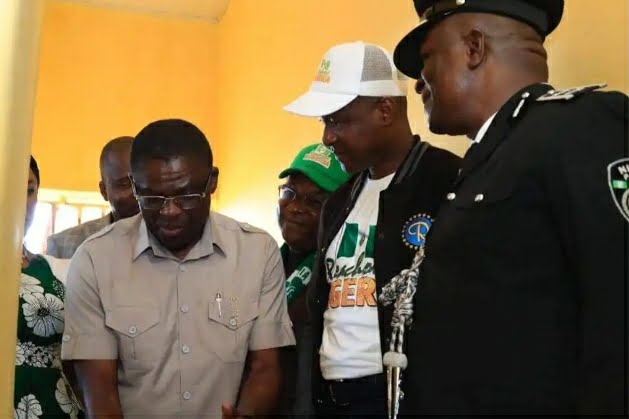 Christ Embassy Edo Region has built a police station and donated a 22kVa generator, borehole and a surveillance van for use as part of the Reachout Nigeria Community (R.O.N) development with Rhapsody of Realities.

The church saw the need to embark on such a project to contribute their quota to the development of the state.

The presentation was done by the leader of the church alongside some church members who attended the ceremony.

The donation by the church moved many netizens as they trooped in their numbers to hail the church for thinking about the community in such a helpful manner.

Meanwhile, The Ondo State Governor, Rotimi Akeredolu, has conveyed his congratulatory message to the governor-elect of Anambra, Prof. Chukwuma Soludo, describing him as a man whose academic profile stands to benefit the state.

MORE:  Nigerian man dies after sleeping with a prostitute (video)

Akeredolu posited that he is looking forward to collaborating with Soludo in the fight against the region’s security and economic concerns. He lauded him on his meritorious academic achievements.

Akeredolu’s congratulatory message was contained in a statement issued by the Ondo State Commissioner for Information and Orientation, Donald Ojogo

In his words: “We look forward to working with Prof. Charles Soludo under the auspices of the Southern Governors’ Forum, for the peace, security, and development of Anambra State, Southern Nigeria, and the country at large,” the statement quoted Akeredolu as saying.
He continued, “No doubt, we will be happy to explore the experience of the Governor-elect, as it relates to the economy and also helps in our efforts to keep the people of Southern Nigeria safe.