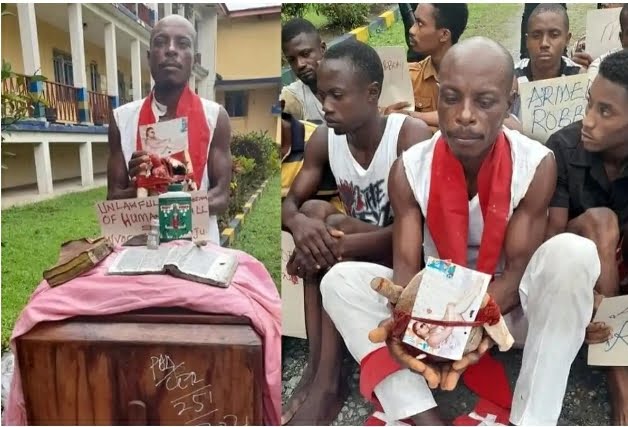 The Cross River state police command has arrested a pastor of the United Evangelical Church for allegedly having a human skull in his possession.

Following a danger to life complaint from a concerned citizen, 45-year-old Michael Bassey was arrested.

The culprit was detained at No. 56 Uwanse near Asuquo Ekpo Street in Calabar South, according to Mr Sikiru Akande, the state’s Commissioner of Police.

“The suspect was arrested with one human skull tied with the complainant’s picture and carved human image with red clothes.

“Investigation is still ongoing and the suspect will be arraigned in court.”

On the other hand, Bassey denied being involved in any nefarious activities. Before his arrest, he told reporters that he had been performing healing services for his congregation members.

MORE:  He Did Bl0od Money, Well He Made It! Can You Say The Same For Yourself?- Fan Slams Obi Cubana Critics

“I don’t know anything about this human skull. I am innocent of the charges against me. my mother gave me Bible and garment as a young boy, then I started helping people by liberating them from various curses and enchantments,’ he said.

“I started by liberating my family who always “sacrificed” their male children for the female ones to survive, I broke that covenant and I have been liberating people in Cross River and beyond, I am not a killer, I only help people.

“I am not a herbalist, I am a prophet, I was ordained at a Church ( names withheld)at Azikiwe Street, Calabar by my spiritual father. After I liberate people, they come back and show appreciation, I am not a native doctor ” he added.

Man Shows off the Big Hotel, Apartments and Lands He Bought for Self and Wife after Winning N755m Mega Jackpot

Na me dey do everything: Comedian AY gives update on new daddy duties