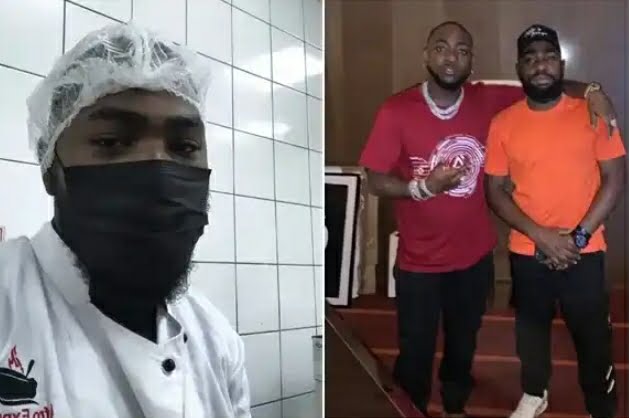 Davido has taken an identical road after putting a smile on a Nigerian chef living in Dubai, shortly after his ‘heroism’ by gifting all of the money he received from his crowdfunding to orphans.

The young man, identified as Jamal Usen, was given a contract to feed the American and Nigerian entertainer throughout his stay in the United Arab Emirates.

In a message on Saturday, November 20, Jamal happily informed the internet world of this new development. He praised the hitmaker for the opportunity and shared a photo with him.

MORE:  (VIDEO) Tiwa Savage S3x Tape Will Stay In My Head For A Long Time-Daddy Freeze

David has made his first meal request, which is cooked plantain with vegetable sauce, the young man added a few moments later.

“And thank you all for motivating me to become better every day,” he wrote in another post. “I sabi say I dey f**k up die but nobody is perfect & y’all still love me regardless.” Thank you very much.

Thank you, Lord, for the blessings you have bestowed onto my life.”

Meanwhile, in light of Davido’s crowdfunding campaign, which coincides with his upcoming birthday, Shatta Bandle has vowed to not only give Davido money as his widow’s mite, but also a large loan.

MORE:  “You Will Regret This” – Nigerians Drag Dorathy Over Message To Erica

The Ghanaian famous midget was observed in an environment that resembled a pub and decided to take time out of his enjoyment to speak with the Nigerian superstar who was brimming with effervescence.

Shatta Bandle, as per usual, threw his braggadocious ego into the equation by offering the singer a loan. “Why, OBO?” As Davido alternated the moment with grins and pleasant emotions, he asked, “You want [to] accept loan?”