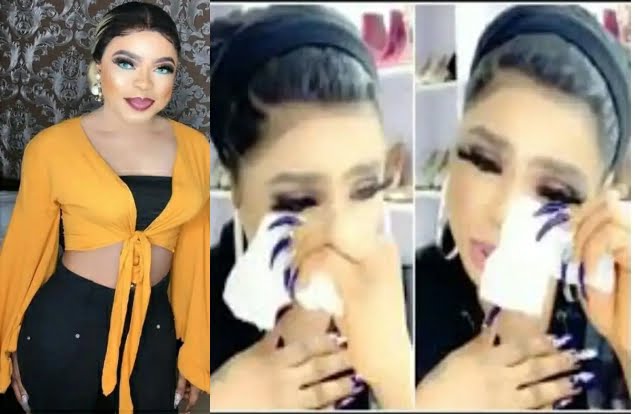 Despite many attempts to become a woman after being born a man, popular Nigerian crossdresser, Idris Okuneye better known as Bobrisky, has not given up on dumping his male physique and identity of a man.

Bobrisky’s crossdressing lifestyle has garnered a large following on social media he still parades herself as a woman although he can’t admit to failing in transforming from a man to a woman.

He has made several trips outside the country to undergo various cosmetic surgeries and other surgeries just to become a woman but he has not been successful.

It was rumored that Bobrisky cut off his pen!s but he debunked it as he also talks about how uneasy he feels walking with it and is still going to take it off and have the vag!na of a woman fixed to replace it and is ready to pay any amount to make that happen.

One of the things Bobrisky was unable to do was to change his reproductive organs even after altering the shape of his butts and waist after undergoing the surgery in Brazil. You would also recall how he lamented that he can not menstruate or give birth due to the absence of a womb in his body.

The Lagos socialite and bleach expert was also unable to possess Hair Follicles. Normally, the hair follicle in women is different from that of men. Apparently, Bobrisky’s wigs he usually put on made people think that he is a woman.

Furthermore, Bobrisky could not change his chest despite her many cosmetic surgical procedures. One of the dominant features of a woman or what one can identify a woman with is her b00bs and this is something Bobrisky wanted badly but he failed as he has been wearing women bras and apparently stuffing them with foams.