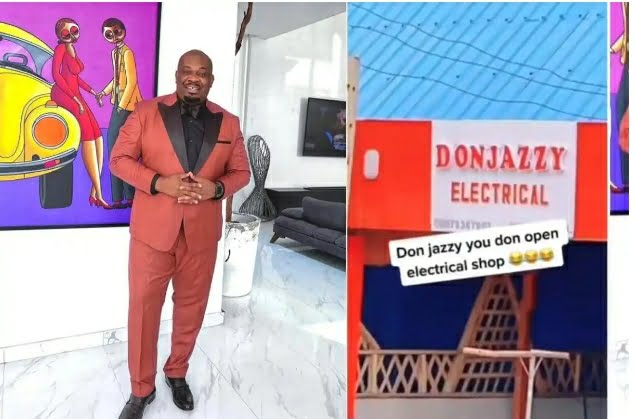 Don Jazzy, the boss of Mavin Records, reacted playfully to a video after discovering that he owned an electrical store without knowing it, claiming that he solely repairs vibrators.

Don Jazzy is one of those guys who you can’t be mad at since he usually makes comedy out of serious situations, especially now that he’s discovered that some people are using his name for business without his permission.

He posted a video of some individuals wondering when Don Jazzy built an electrical business after stumbling onto DonJazzy Electrical Shop and reacting to it. By creating a comedy out of it, he made the whole issue humorous.

He encouraged his fans to contact him if they have any electrical issues, and he also stated that he repairs vibrators for females, implying that they should contact him if their vibrators become spoilt so he can repair them so they can use them again.

If it had been someone else, the individual might not have taken it lightly that his or her name was used on an electrical business, but Don Jazzy went so far as to promote the person by reposting the video on his page and inviting people to call if they had any electrical problems.

Please contact me if you require an electrician. I fix vibrators that have broken down.