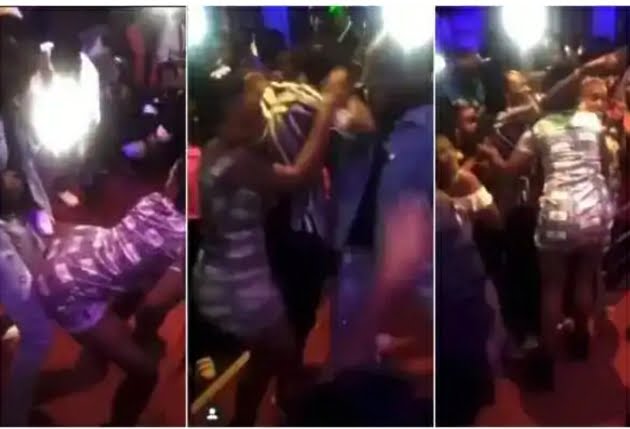 Drama erupted at a nightclub during a party when a musician’s performance was interrupted by a male fan after the fan climbed upstage to recover his girlfriend who was being grinded by the musician.

In a video privy to wothappen.com, the curvy lady who is endowed with an impressive backside decided to serve the musician who was performing on stage her backside by giving him a sweet lap dance.

However, this did not augur well with the boyfriend as he watched on, and knowing what this could lead to considering the musician could snatch her from him, he rushed to the stage and pulled her out of the stage which caused a brief commotion between him and the musician.

MORE:  “What If Pantami Is In Fact The Leader Of Boko Haram”Twitter User Quizzes

The Alaafin of Oyo, Oba Lamidi Adeyemi is still strong and can bust some dance moves for several minutes as a video sighted on social media shows him getting ‘jiggy jiggy’ with one of his younger wives at a party.

The Alaafin of Oyo took to the center stage with one of the wives and to dance and he could be seen spraying hard currencies on her whilst she dances.

However, netizens have expressed concern for the royal monarch’s well-being as the queen he was dancing with was very aggressive whilst dancing and his energy was not a match to hers. Netizens begged the Queen to take it easy with the royal monarch before he falls.