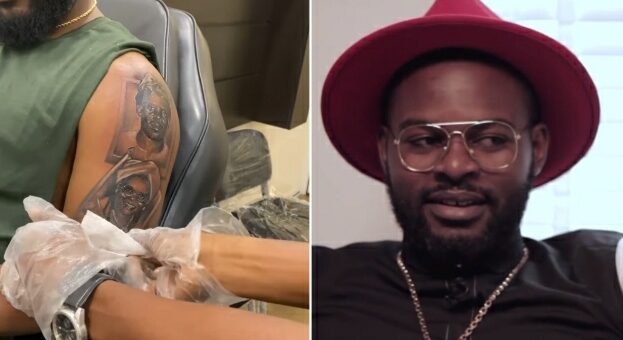 Falz has gotten a new tattoo on his arm and he’s showing it off with enthusiasm. The photo captures his parents, his sisters, and his own face.

The rapper shared the new design with is fans on Instagram and you can imagine the warm reactions from his fans.

Falz, Folarin Falana is a Nigerian rapper, songwriter, and actor who began his career while in secondary school after forming a group called “The School Boys” with his friend before his professional career as a music artist began in 2009.

In other news, the Nigerian Bar Association has confirmed that one Mr. Okeke who said he’s a lawyer and filed a suit against Falz and other celebs who took part in the EndSars protest is fake as his name was not on the list of directory of lawyers in Nigeria. SaharaReporters learnt that the NBA reported Okeke via an official letter to the Federal Capital Territory High Court, Kubwa.

At the hearing of the matter on Monday, the case was called up and there were introductions from the celebrities, others and applicant, Deji Adeyanju’s lead counsel, Samuel Ihensekhien and Kenechukwu Okeke, who appeared as the first defendant, and as a counsel for himself.

The NBA Abuja Capital Chairman, Chukwuemeka Clement, also appeared in this case as amicus curea (a friend of the court). At the commencement of the case, Ihensekhien informed the court that in view of the avalanche of court process filed by all parties in the case, there was a need for a clear date to be taken by the honourable court to hear all pending applications.