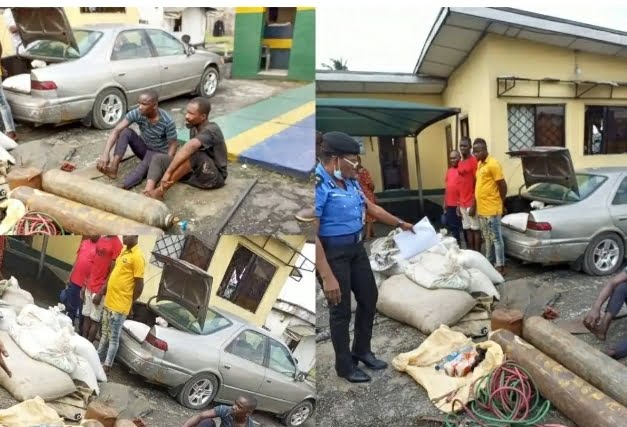 The suspects accused of operating for “many months before they were trailed and caught during an operation” in the Bua region of the state were paraded at the offices of the NPA in Port Harcourt on Wednesday November 10.

According to Peterside, some of the things stolen by the suspects were worth up to N20 million. She also stated that the accused would face charges in order to act as a deterrent to future crimes.

The accused, on the other hand, denied any wrongdoing, alleging that they “were on the waters ways for something totally different.” A boat, three gas cylinders, two spanners, rusted iron fillings, and wheat were among the things recovered from the suspects.

In other news, after Prof. Charles Soludo’s victory at the polls, Ohanaeze Ndigbo and Senator Chris Ngige, Minister of Labour and Employment, commended President Muhammadu Buhari for keeping his pledge of a free and fair election in Anambra state.

In a statement released by Ohanaeze’s National Publicity Secretary, Alex Ogbonnia, the party praised Buhari for not interfering with the election’s outcome and asked Soludo to “show great heart, magnanimity, and statesmanship in his public duties as the future governor of Anambra State.”

“Ndi-Anambra have spoken with this resounding victory. Having contested in 2010 with Soludo, who was then the PDP candidate and myself in ACN; an election in which I was ‘awarded’ the second position even though I won outright and Soludo third, I knew that with his tenacity of purpose and drive, he would one day make it to the seat of the Governor of Anambra State. It is a case in patience and endurance, an aspiration nurtured to serve the people with all his strength, I seriously believe Ndi-Anambra will hence, entertain no excuses. Much has been given, hence the expectation is very high. Knowing Soludo as I do however, I have no doubt that our people have made an excellent choice by voting him…

“At this auspicious juncture, the president of the Federal Republic of Nigeria, Muhammadu Buhari, deserves a glowing  national tribute. I put on record that Mr. President had on three different occasions, assured through me, that the Anambra governorship election would be free and fair. The last of such occasion being on October 14, 2021, when I conveyed the fear and the consternation of the religious leaders , elder statesmen and traditional rulers of Anambra State, more especially that of his friend, the Archbishop of Onitsha Metropolitan Province, His Grace, Dr. Valerian Okeke to him in his office.”