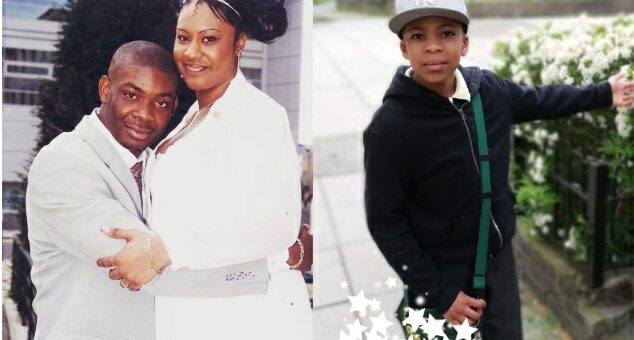 Just as we thought Don Jazzy’s outburst on his marital status was gradually leaving the hotspot of social media, Nigerians have managed to make deeper analysis by comparing him to his former wife’s son.

Ghgossip reported that Don Jazzy came out to answer the many questions begging for answers from fans and colleagues alike about when he was getting married. The Mavin Record CEO disclosed that he got married to model and writer, Michelle Jazzy about 18 years ago but their marriage hit the rock after 2 years after he focused so much on his music. Sharing the surprising story, he added a old photos of their wedding.

Fans quickly trooped to the Instagram page of Michelle Jackson to see for themselves who the ex-wife of their favorite producer is. Glancing through the photos on her Instagram page, they discovered a picture of her son who they have assumed to be Don Jazzy’s son. See his photo below:

A social media user with the handle @jioka, wrote;

“We are here for our son. He looks exactly like the Don. What a sweet fine Man. I think you Guys can make up together again.”

@iamobiomajoy joking shared the full story; Let me tell u guys full gist, it is true that they are once married and after d divorce donjazzy and yarnstaswitch was not able to move on, so they decided to be friend with benefit, that is to say dey still they knack, few years later little donjazzy was born

@vivianjohn55 wrote; “Madam our son is cute if you see the head sef we don’t need DNA. Give us our son.”