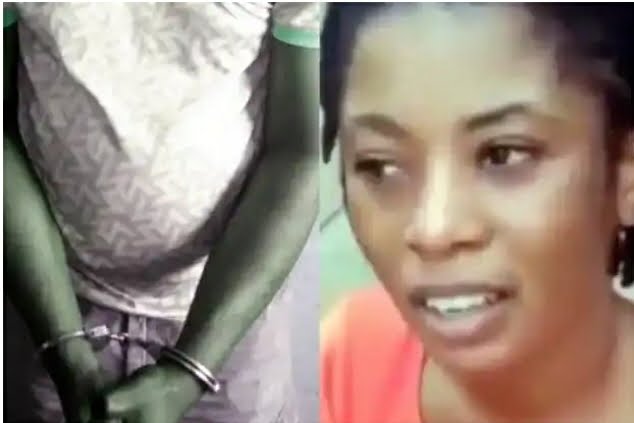 A Nigerian lady called Usman Fatima who just completed her secondary education has narrated how her biological father forced her to sleep with her and has been having s3xual intercourse for years now.

Fatime who lives with her father, Usman Sani Momoh, and her mum Kadijat Usman together in Ondo State revealed that her dad threatened to kill her if she spills their affair with her mum or anyone else.

Captured by bunaboy.com, she said;

” Whenever my mother has slept off in the middle of the night, he will wake me up and take me to the kitchen to have s*x with me.

” It gets to a point where I will insist that am not going to allow him to have s*x with me but he will send me out of the house, I have slept outside on several occasions that my mother did not even know whether I slept at home or not.

MORE:  My Conversion Was Already Ordained By God – Chidinma Ekile

” She won’ t even check on me in the room not until in the morning that we will now see each other. My mother would have slept off, I thought sometimes maybe my father used to drug my mother.

” If I told him am going to raise alarm, he will threaten to stab me to death if I dare tell anyone. He will be threatening me with a knife. I tried on several occasions to tell my mother but she won’ t listen to me because she didn’ t believe me.

” He wanted to repeat the same thing with my younger sister, Usman Jemila, that was when I ran away from home then raise alarm.

MORE:  BBNaija 2021: I’m Quitting Teaching, I Want To Be A Model – Yousef Reveals

Fatima’s mum after learning about this told the reporter that she can’t still believe this as it is still a big shock to her.

In her words, she said; ” I was so shocked to hear about this development because how my husband was committing such crime under my nose and I could not find out still sound like a mystery to me.

When her father was asked why he practised incest, he said;

In the course of interrogation, Fatima’ s father, Momoh said; ” I was not on my right mind when I was having s*x with Fatima, it was the handwork of the devil.