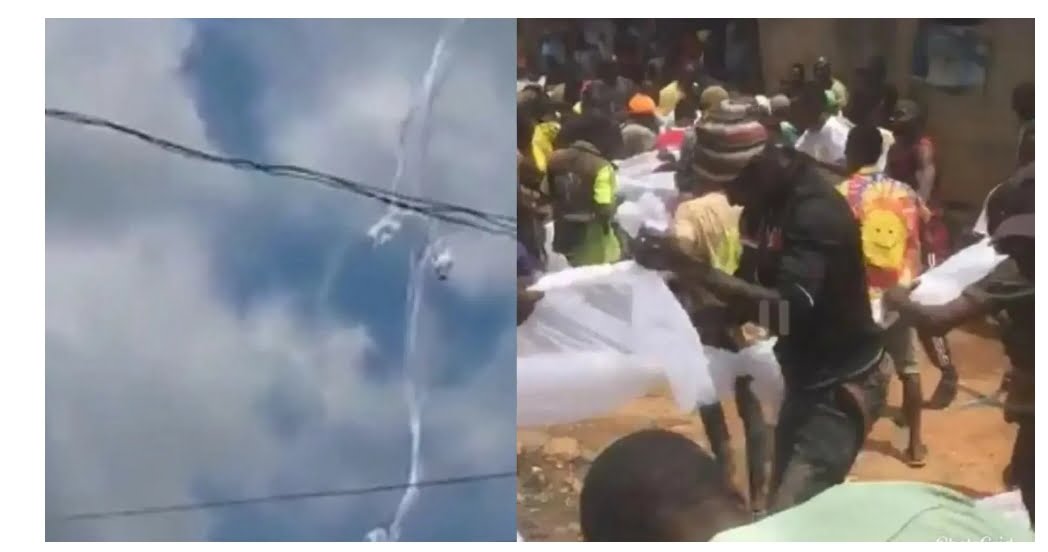 For those who have not yet heard about the trending gist, residents of Ondo town went agog at the sight of a white piece of clothing descending from the sky.

Shortly after the incident occurred on October 27, a crowd gathered outside Alhaji Yesufu’s residence at Sabo area of Ondo town where the item had found a final resting place after minutes of puzzling descent from the sky.

Believing that it was sent by God, hundreds of people rushed to seek blessings from the cloth by touching it or possessing a piece of it.

Some eyewitness accounts alleged that there were inscriptions of ‘Hosanna,’ a biblical term used to express praise, joy and adoration. Others claimed that it was a gift from God to the residents of the community.

MORE:  Don Jazzy Reacts After Sarkodie Bowed To His Jollof When He Visited

After the incident, the footage went viral on social media, and among those who propagated it was the popular Instablog page on Instagram where nearly 100,000 people have seen the video clip on the social network. Comments in the post suggest people believed the cloth actually dropped from the sky.

According to reports, the clothing found a resting place at the front of the house of a man simply identified as Alhaji Babangida Usman. He later disclosed to Premium Times reporters that the white clothing was in no way a miraculous garment which descended from the sky.

The clothing belonged to an event planner and a decorator identified as Agnes Fadoju. She narrated that the white piece of cloth was blown away by wind. She also added that all efforts to convince those who took the cloth that it was hers proved futile.

MORE:  Rudeboy The Love Doctor Teaches Those Loking For Love What To Do To Get Full Option

She also revealed that the inscription was her brand name “Hosanna Ventures.”

Conclusively, this should serve as a lesson to the members of our society who do not wait for confirmation before involving themselves in mysterious events.