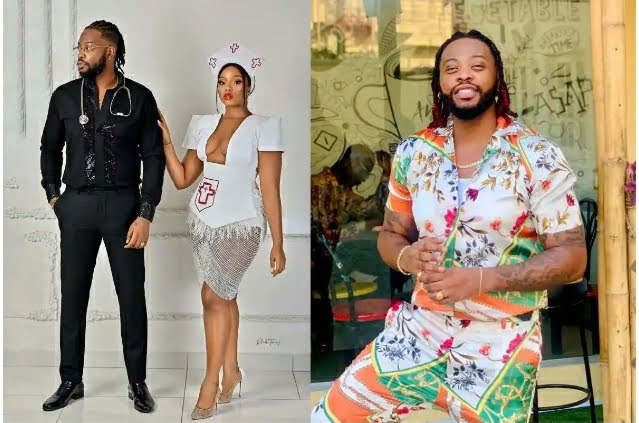 Reality TV stars, Teddy A and Bambam have opened up on their marriage and the build-up to them officially becoming husband and wife.

Teddy and Bambam become romantically entangled whilst in the Big Brother Naija house and after the show had concluded their relationship waxed stronger and decided to solidify their bond by tying the nuptial in a flamboyant traditional and white wedding ceremony in Dubai.

In a recent interview they granted, the celebrity couple revealed that they were not on good terms prior to them getting engaged. Bambam debunked the allegations that Teddy married her because of her pregnancy as she pointed to the fact that you cannot tie a man down to marry you because you got pregnant for him if he does not want to marry.

Read a few comments below;

@mrchauw; `Read d comments and u would know many Nigerians don’t like seeing people married and happy..because it highlight their inability to be happy`

@tosinblack : “They do not owe anyone any explanation on topics like this….its no one’s business as long as you are happy that’s all that matters

Even if na pregnancy, is the marriage still working ? Yes ,thats the only thing that should matter

@propsplaza; `But it would be silly for anyone to assume this? Teddy has a b.by mama he didn’t marry. We don hear o, you people should let it rest

@ceekaykelvin; `You don marry her, una don enter house, carry on bro… we get other things to attend to