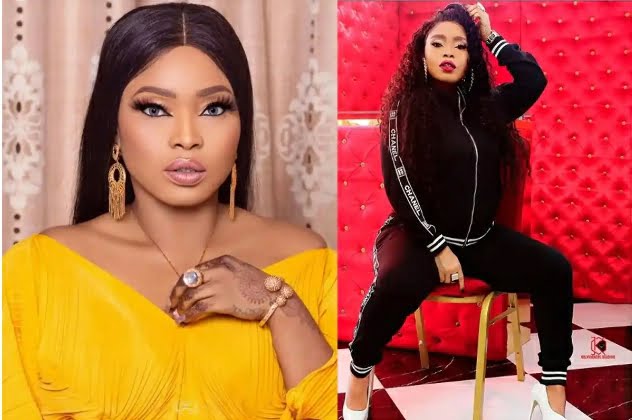 Nollywood actress, Halima Abubakar has tipped women on how they can influence or lure men to eat their meals.

According to Halima Abubakar in a post, she made on her Instagram story, men are obsessed with issues that bother on their se.xual performance so if you want them to eat the food you have cooked for them all you have to do is tell them the food will boost their s3x drive.

”If you want men to eat anything, Just Tell them it boosts s3x drive‘

Meanwhile, popular Nollywood actress and producer, Tonto Dikeh has assured her fans that she is not going to disappoint them in her next relationship following the appalling and dirty breakup with her ex-boyfriend, Prince Kpokpogri.

MORE:  “I Played A Taxi Driver In Another Hollywood Movie” – Davido Reveals (VIDEO)

She made the promise after she posted photos of her and her son, King Andre posing with Mayor Blessing, Prince Kpokpogri’s friend which got her online brothers and sisters thinking she is romantically getting entangled with him.

Reacting to the post, a fan expressed shock as she described Mayor Blessing as a mystery man, and probably something could be happening between them.

The post reads: Tonto Dikeh steps out with her son and a man I don’t know who he is… Omo. Are you thinking what I’m thinking?

However, Tonto Dikeh allayed her fears whilst establishing that Mayor Blessing has been a good friend to her and he defended her during her fight with the Delta State politician. She further promised not to disappoint them again.