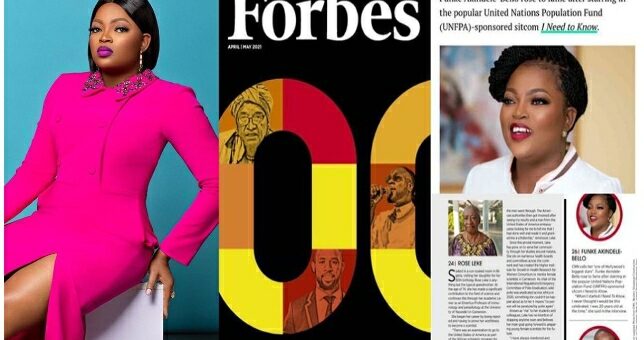 Nigerian actress and movie producer, Funke Akindele has completely on cloud nine after her name appeared in the Forbes ‘100 Icons’ list for Africa.

The Forbes ‘100 Icons’ list for Africa was comprised of many African celebrities and public figures who have performed exceptionally well and made significant impact in their respective fields of specialization.ggg

Taking to her Instagram page to share the great news, Funke Akindele revealed that she was busily working when she got this message from friend, Swanky Jerry and she expressed her appreciation to Forbes Africa for honoring her.ADVERTISEMENT

TRENDING NOW>>  See The Top 3 Poorest State In Nigeria, Check If Your State Is On The List

The mother of twins and ‘Jenifer Diaries’ star noted that hardwork pays and encouraged her fans not to give up but keep on moving as their time is here.

“Been filming and writing back to back and then @swankyjerry sent this to me like “Sis, you never see?” Thanks swanky

Fans did not distance from the celebration as they stormed her comment box with tons of congratulatory messages.

A follower identified as @iambimbothomas wrote;

You’re worth even more , hard worker aiye . May God continue to strengthen you. And us all