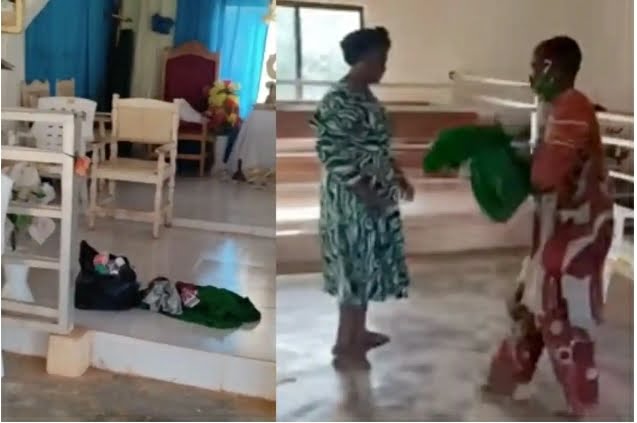 A newborn infant was discovered deserted on the altar of the Holy Fountain Cherubim and Seraphim Church, Oda Road, Akure, Ondo State.

According to reports, when members of the church entered the facility in the early hours of Wednesday, November 24, they heard a baby crying.

An unknown individual had thrown the newborn, wrapped in green garments, on the altar.

A spokeswoman for the State Police Command, Mrs Funmilayo Odunlami, confirmed the incident and said the infant had been handed over to the state Ministry of Women Affairs and Social Development.

“Initially, the kid was in our custody, but we have since turned the child over to officials from the Ministry of Women Affairs,” she continued.

In other news, the All Progressive Grand Alliance (APGA) has reacted to the EFCC’s decision to place Willie Obiano, the governor of Anambra State, on its watch list.

The reason for the governor’s inclusion on the anti-corruption radar is unknown. Informed sources claimed, however, that the move could be an indication that the agency is secretly investigating the governor and has information that he wants to travel after handing over power to his successor, Charles Soludo, in March 2022.

Evangelist Chinedu Obigwe, the National Coordinator of the APGA Media Warriors Forum, characterized the situation as the work of the “sore losers” of the state’s just concluded November 6 governorship election in a statement released in response to the incident.

“Governor Obiano has done nothing wrong that will warrant him being placed on the EFCC watchlist,” says Obigwe, who is also the national president of Igbo Youth For Positive Change. “However, some evil forces hell-bent on spoiling the ongoing celebration mood of ndi Anambra want to use EFCC to achieve their evil plan.”

“They will undoubtedly don the garment of humiliation because Governor Obiano has no skeleton in his closet and has nothing to fear from the EFCC.”

It’s vital for me to remind Bawa, the EFCC chairman, that on taking office for his second term, Governor Obiano brought Ibrahim Magu, the former EFCC chairman, to Anambra to instruct his appointees on how to run a corruption-free government.

If the governor has a skeleton in his closet, he is unlikely to take such a brave step.

I condemn in its entirety the attempt to create the wrong impression that Governor Obiano has plans to run out of the country after handing over to his successor.

The governor does not have such a plan and he is ready to give an account of his eight years stewardship as Anambra governor.”the statement read