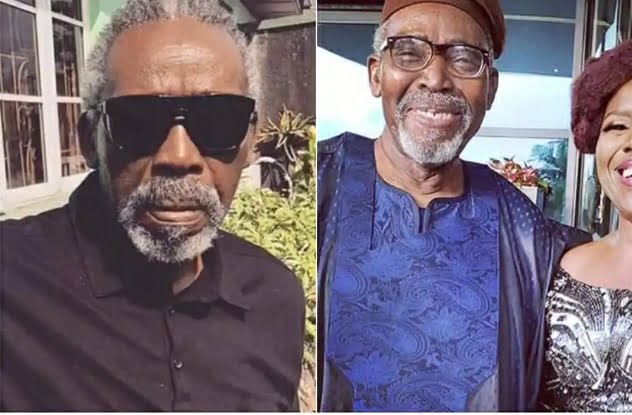 After being out of the movie industry for several years, veteran Nollywood actress Joke Silva has now opened up about the genuine state of her husband, OIu Jacobs‘ health.

You may recall that Olu Jacobs was supposed to have committed suicide after becoming unwell, but the accusations were quickly debunked when he turned up at an award ceremony to accept an honorary award.

Joke Silva revealed that her husband has dementia in an exclusive interview with media personality Chude Jideonwo. Dementia is a health condition that causes loss of memory, language, problem-solving, and other thinking abilities severe enough to interfere with daily life.

According to her, the family has been coping with this difficulty for several years, but she is grateful to God for guiding them through it.

“He’s coping with concerns that have been bothering him for a few years.” “It’s called dementia with lewy bodies,” she explained.

“That is what we have been dealing with,” she continued, “but the issue is, it is hard for him because he doesn’t comprehend what is going on, and it is hard on us family members as well.”
We’ve been through a lot in the last few years, but we’re grateful to God.
We’ve lately gone through some periods and situations where I wish I had the old you here so I didn’t have to deal with them alone, but we’re happy for the clarity. I miss the times when we collaborated.”

Take a look at the video below…