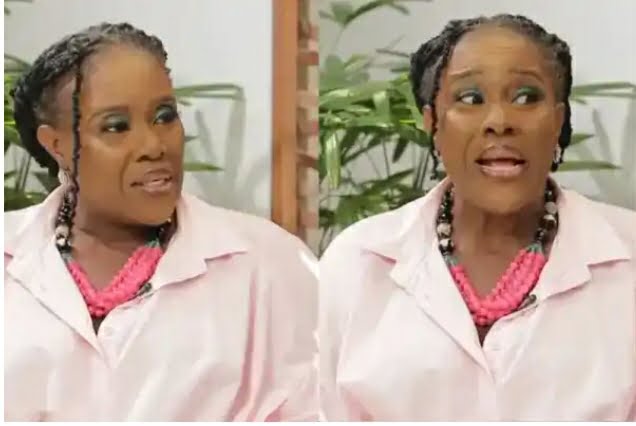 In an interview with Chude Jideonwo, veteran actress joke silva revealed how Nollowood producers and marketers turned her down, similar to what they did to Rita Domini, Genevieve Nnaji, and a few other A-list stars a few years ago.

Joke Silva reflected on the time in her life during the interview, saying:

We produced this film a long time ago, and the producer, you know, at the time, all the marketers were getting involved in movies. And this marketer came to our house, where we were living in Ikeja at the time, and brought money for my husband and me to come on this movie that they had already begun filming, and they wanted us to play the parents of the star of the film.

We said, ‘Why not?’ because the money was right there, so we said, ‘OK, let’s go.’ Then we began filming. At the time, Fred Amata was the director. We began filming, and things were going well until we were waiting for the lead actress one day. We arrived on location on time, despite the fact that they had told us we had to be there by 8 a.m. We never arrived late. I put on my clothes. And we were waiting. And then there’s the waiting. And then there’s the waiting. Until four o’clock in the afternoon.

MORE:  "How do I stop m*sturbating it's killing me" slay queens cries out and asks for public's help.

When the marketer arrived on site with the star, I turned around and said to Fred, “Fred, I’m hired to work with you for two weeks, but I’m going to give you two more days because I know what location can be like.” If we don’t finish in those two days, I’m going to walk’. ‘I completely understand,’ Fred remarked, but I’m sure he didn’t think I’d do it. We still had one scene left after those two days, and it was supposed to be a pivotal sequence in the film. I didn’t come, o! I failed to appear.

It was a major marketer at the time, and this man couldn’t believe what he was hearing. (He was yelling various things.) ‘Get her here,’ I said, ‘get to where?’ Abeg’. As a result, I was placed on a covert blacklist for quite some time. Mine was never announced, but it was completed, and I couldn’t care less.