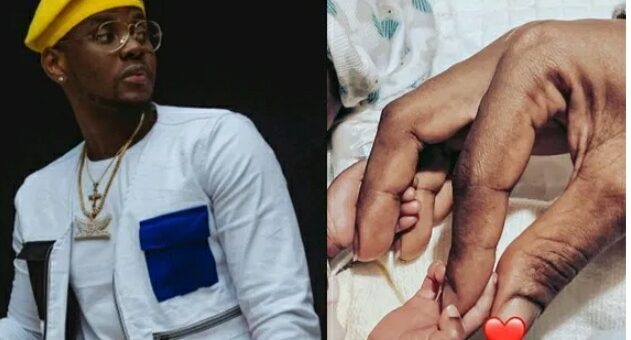 Nigerian singer, Oluwatobiloba Daniel Anidugbe professionally known as Kizz Daniel has struck gold in double proportion after his wife delivered a set of twins for him on his birthday.

The handsome singer and stage stopper took to his official Twitter page on Saturday, May 1st, 2021 to make the announcement while celebrating his 27th birthday.

Kizz Daniel released a third follow-up single, “Laye,” on his birthday, along with a video two weeks later which was shot in different locations in the eastern part of Africa and was directed by AJE FILMS. Daniel released his first studio album titled New Era on May 14, 2016.

After his exit from his former label G-WorldWide, he went to float his own personal imprint FLYBOY I.N.C. which recently signed two new acts Demmie Vee and Philkeyz. After which Kizz Daniel was featured on Demmie Vee single entitled “You Go Wait?”.

2018 was sure a good year for the WOJU crooner, he features Wizkid on a Hit Song “FOR YOU” and the DMW boss, Davido on another single “One Ticket” which is Currently Trending within 24hrs of its release. On the 30th of December 2018, Kizz Daniel released his 2nd Studio album and his first under FlyBoy Inc titled “No Bad Songz”.

TRENDING NOW>>  Pastor dies while preaching in his church (VIDEO)

The album received positive reviews from music lovers, it debuted at No 55 on the US iTunes Chart and became number 1 on the World Album Chart within 24 hours of its release.

On 25 June 2020, he released his third studio album ‘King of Love’. In 2017, many of his fans thought he would switch into comedy in the nearest future as he was uploading comedy skits. However, he said he has no intention of switching into comedy as music is his main talent (Wikipedia)