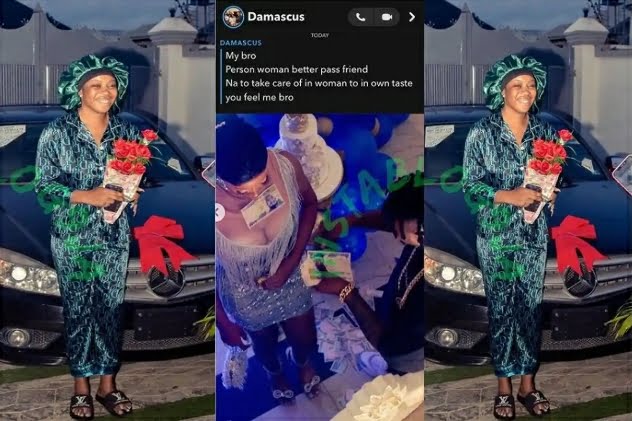 A Nigerian man has rewarded his girlfriend for standing by her during the hard times of his life after dating her for almost four years.

According to a Twitter user identified as @wunna147 the man was broke but his girlfriend was ten toes and stood with him, and in appreciation for the unflinching support and love she has shown him all these years, he bought a brand-new Benz for her as gift for her birthday.

Wunna claimed that he congratulated him and his friend said this;

‘‘God no go let us go all out for the wrong person Omo love is sweet abeg, just find you own person that will still love you even when you’re down to your lowest’.

See some reactions from social media users below;

This is a rarity and I wish people would stop making this seem like a norm. Staying with a broke man is a choice and it’s not for everyone. And just because the guy has potential doesn’t mean he will live up to it.

Atleast he is a grateful type, some don’t even even bother.

Congratulations on your new whip o my dear sister

Nowadays, to find a gal that stands by her broke bf., you have a better chance of finding a needle in a sea

Well she’s lucky to have a good man that repaid all her kindness back to her in good measure. Not every woman that stood by a man gets lucky like this.

I have told you to stand by me countless of times,now that I don’t have money,you don’t know what tomorrow holds for me baby

Man Shows off the Big Hotel, Apartments and Lands He Bought for Self and Wife after Winning N755m Mega Jackpot

Na me dey do everything: Comedian AY gives update on new daddy duties