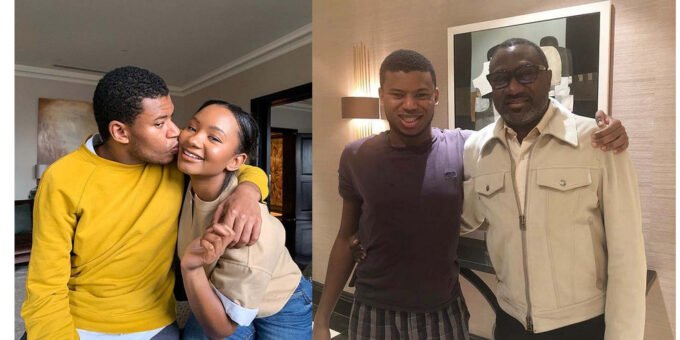 A lot of people do not know much about Fewa Otedola, the only son of Nigerian billionaire, Femi Otedola. That is because unlike his 3 sisters – Temi, Tolani, and Florence (DJ Cuppy) – Fewa doesn’t appear frequently at social events.

Fewa Otedola is the last child of the couple.

Being the son of one of Africa’s most successful businessmen, one would expect Fewa Otedola to be a highly popular figure by now. However, he suffers from a developmental disorder popularly known as autism.

Autism is characterised by difficulties with social interaction and communication, and by restricted and repetitive behavior.

People with autism most times need the love and care of persons around them to do certain things.

According to Femi Otedola, their relationship is becoming less one-sided, and that they are friends. Temi also told everyone that Fewa doesn’t need anyone’s sympathy. He is the most genuine and caring person he knows.

Temi Otedola talks about how Fewa is coping with autism

“In 2004, my mum called my sisters and me into her bedroom. With the composure only a mother can have, she told us that our baby brother, Fewa, had ‘special needs’, Temi wrote on her JTO fashion blog.

“I remember seeing my mum helping Fewa with simple tasks like brushing his teeth, helping him to get dressed, or feeding him lunch, with each day ultimately ending in exhaustion. Our family has been so blessed to have help from carers, but no one can deny the resilience my mother has had raising Fewa. It is the thing I most respect about her.

She added that he is becoming less dependent as of 2017, and their relationship was increasingly becoming ‘less one-sided’.

Furthermore, she went on to say that he shouldn’t be pitied because he “is the most genuine and caring person” she knows. And it is the purest form of “unconditional love” she saw in him that shaped her into the person she is.

Is he dating or married?

We’ve seen many people show interest in his relationship status, most especially ladies. Why not? I mean, the young man is very attractive. Moreover, he is the heirs to the Otedola fortune.

He is certainly not married. However, it is not clear if he is in any relationship. Most things about him are not known to the public. Therefore, he could be in a relationship without anyone knowing.