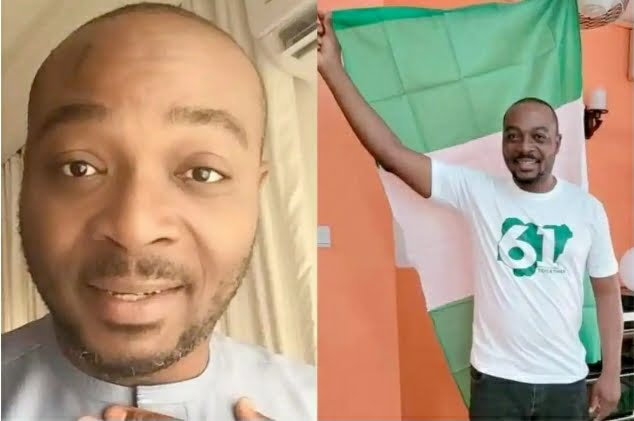 Sad news reaching wothappen suggests that Tordue Henry Salem, a Vanguard reporter has been found dead 29 days after he went missing in Abuja.

The news of his demise was confirmed on Thursday night, November 11 by Vanguard however the details surrounding the recovery of his lifeless body remain sketchy.

Wothappen had earlier reported that Tordue was covering the House of Representatives and was last seen on Wednesday, October 13, 2021 around 8 and 9pm.

He was said to be walking with a lady who he allegedly flagged a cab for and left before him. Reports suggests that he told the lady that he was going to Area 8, Garki but he never reached the place.

The Intelligence Response Team was quickly alerted about the sudden disappearance of Salem the following day. All efforts to locate his whereabouts proved futile. Salem’s sister Jessica disclosed that his daughter has been constantly asking why her father is not calling to talk to her.

The members of the Nigeria Union of Journalists (NUG) on Monday, October 25 trooped the Nigerian Police Force Headquarters to protest over the missing reporter.

On Tuesday, November 9, the House of Representatives requested that security services investigate the circumstances surrounding the journalist’s absence and do everything possible to achieve his release.

Some arrests were apparently made, according to Vanguard. One of them was a man who had been accused of attempting to blackmail Salem’s family.

On October 26, 2021, the suspect, named as Prince Enyenihi, 25, contacted Mrs Salem through text message with a hidden number, asking N100 million in ransom for her husband’s release.

Part of the text message read: “if you don’t pay, Tordue will be killed in seven days. For more information, call this number”. The text message also contained an account number the money should be paid into.

This was followed the next day by a call to Salem’s wife from an unknown number. Mrs Salem wanted to talk with her husband first to make sure he was still alive before beginning negotiations. The caller, on the other hand, handed the phone to someone who tried to play along.

When she realized the voice wasn’t her husband’s, she asked the stranger to say their daughter’s name and birth date, a request that was received with total silence on the other end.

Mrs Salem received another call from an unknown number later that evening, asking if her husband had been released.
The perplexed woman was alleged to have inquired as to why the caller’s phone number was hidden.

On October 27, another text message arrived on a bulk text messaging network, demanding that the family pay the N100 million ransom by the next day, or Salem would be killed.

The police responded first, decrypting the phone number that had been phoned and tracing its owner to a woman in Port Harcourt, Rivers state.

During questioning, however, the owner of Joy Skin Care vehemently denied, claiming instead that a certain number had been phoning her line since October 26, 2021.

Following further checks, detectives established that the number was the same as that used to contact Mrs Salem, and Enyenihi, 25, was detained on November 5, according to Vanguard.

In during early investigation, it was determined that he was the beautician’s next-door neighbor. During questioning, he said that he learned of the Vanguard reporter’s abduction via a leaflet that went viral on social media and included Mrs Salem’s phone number as the person to call if discovered.

The suspect further alleged that he sent the text messages without his female neighbor’s awareness, and that he obtained her phone number and account information from her Facebook page.

“I knew the family wouldn’t pay the money. I used the owner of Joy beauty skin care ‘s account details in order to punish her for always talking to me anyhow” he said.

The Police labelled the arrest as a decoy to what they were searching for.