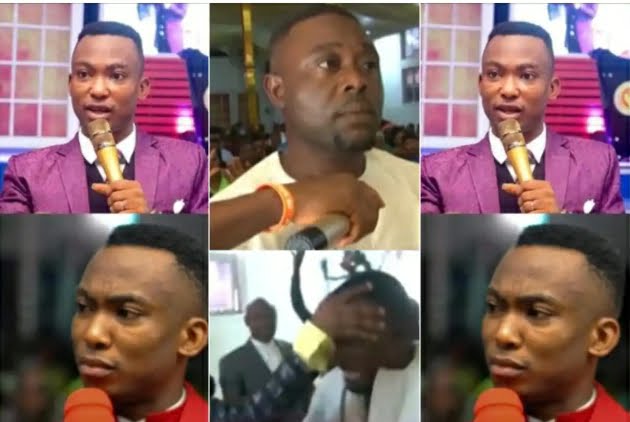 After a man begged for help because his manh00d had shrunk after being stolen, Evangelist Gospel Agochukwa, a Nigerian preacher, performed a miracle at a church service.

In front of the crowd, Evangelist Gospel Agochukwa, the General Overseer of Shekina Area Ministries, conducted a ‘show’ of God’s power by returning the man’s third leg and increasing its size.

In a video that has gotten mixed comments on social media, the clergyman asked the man if his boxer shorts had gone missing recently, and he said yes.

Gospel of the Evangelists Agochukwa inquired if he understood the reason for his stolen manh00d, to which he replied that he did not.

When you remain for a while, you’ll probably touch it a little, even on the bus? I will retrieve your manhood and return it to you.

Do you require a larger size? “I can spiritually enhance the size,” the Pastor says, as the man verifies his vision by nodding and shouting ‘Amen.’

While placing his palm on his forehead and lower belly, the man of God prayed for him and requested God to release his manhood, stomach, and intestine.

He jerked and fell to the floor as soon as the pastor touched him.

The man shares a testimony about his restored manh00d, which has also grown in size, in the latter part of the film.