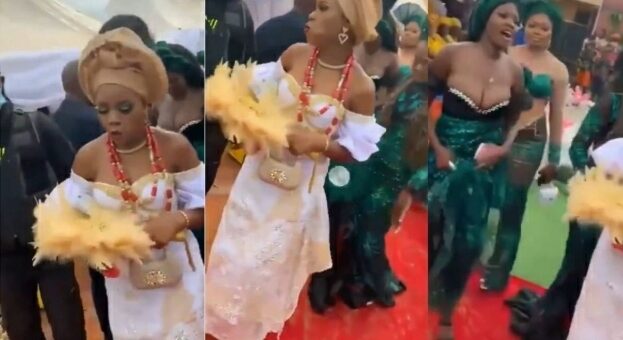 A video circulating online which captured the moment a bride was shunned at her wedding when a man walked passed her to shower her friend with money.

Weddings are usually organized with friends being made to accompany the bride to sometimes grace the occasion with kinds of dances from them.

However, in the video sighted by Ghgossip, one of the friends stole the show as she caught the attention of a man who approached the bride to spray her with money. Though, the bride’s friend has serious and unusual dance steps, she also looked busty and well endowed.

Obviously, the man who passed by the bride after ignoring her was attracted to the b00bs which popped out of the lovely Aso-ebi of her friend. This made him channel the money supposed to be sprayed on the bride to her friend.

Meanwhile, the video sparked debate on the gram after it was shared on the page of famous Instagram blog Gossipmillnaija. Many people said the bride should be thankful to her friend for enticing the money to spray so much money at her wedding whiles others came at the bride’s friend for exposing her bosoms.