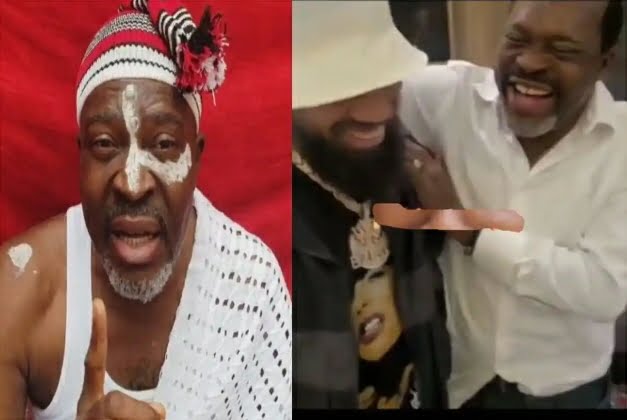 Veteran Nollywood actor, Kanayo O Kanaya has finally come to terms with the fact that he cannot run away from the tag Nigerians have placed on him that he is in to money rituals due to roles he plays in Nollywood movies.

Social media users have been making fond of everything they see about him on social media especially when they see him pictured with someone as they jokingly raise suspicions he will sacrifice that person.

However, in this new video shared online, Kanayo O Kanayo caught up with popular singer and rapper, Phyno and whilst trying to make a joke about his character, a friend was heard suggesting to Kanayo to sacrifice Phyno for money rituals but shut down the idea saying he is not going to sacrifice Phyno.

They laughed over it as they were boy clinched to each other and Phyno told Kanayo to stop doing sacrifices and money rituals in his movies.

Reacting to the video and Instagram user identified as @blakkgold wrote;

To think others in his comment section will comment and play about rituals and he’ll attack. See him smiling sheepishly as they joke about it. They don’t rate you guys o

Nnanyi sacrifice is here, chief Omego. Abeg no use phyno nwanne m for sacrifice o!, use Alex Ekubor instead