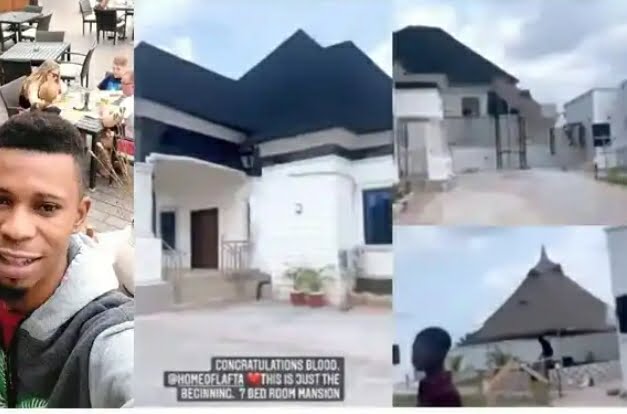 Mr. Angel, a well-known comic creator, has constructed an enormous house in the center of Nigeria’s capital.

Mr. Angel published a new video clip of his freshly built 7-bedroom house with a big compound as an extension of Home Of Lafta, a comedy organization that has lived up to its moniker of giving unadulterated entertainment to Nigerians on social media.

A member of his comic group posted photos and videos of the new crib with a happy greeting in the caption.

“Way to go, blood. @HOMEOFLAFTA This is only the first step. The post reads, ‘7 bedroom mansion.’

Meanwhile, Debo Adedayo, a Nigerian comedian, actor, and sketch creator, stated in a post why he declined to accompany his colleagues to see the second gentleman of the country.

Mr. Macaroni stated on his Twitter page that he was invited by the organizers of the Award Nigeria Skits Industry Awards (NSIA), but he declined because he is dissatisfied with Nigeria’s authorities.

“I’ve tried so hard not to say anything about this problem,” he added, “but I’ve read some comments and conclusions that don’t sit well with me.” My conscience will not allow me to remain silent any longer. So, for the sake of my conscience and posterity, I must say what I know.

“For starters, I don’t believe there is a sketch writers’ association. If there is, I am completely unaware of it. And that’s good because, before the tag “Skit Maker,” I was an actor/thespian.

“I don’t believe those who went to see the VP without me or anyone else intended to put me on the back burner.” I’d like to imagine they, like me, were asked to see The VP by the organizers of an Award Ceremony. I declined the invitation, which was the only difference.

I declined for a simple reason. As a citizen, I am dissatisfied with our leaders and refuse to interact with them. It’s fine if others believe that sitting with the government will make a difference and decide to give it a go. They shouldn’t be crucified for that, in my opinion.

I’ve just seen too much to believe that the government doesn’t see or hear everything. They and their employees are constantly connected to the Internet. They are aware of our grievances and complaints, but they do nothing to address them. So, what will it alter if you sit down with them and tell them what they already know?

I was not present at that meeting, so I have no idea what was said. But I don’t think those that went would say anything other than what we’ve all been saying all along: that we need stronger governance and leadership.

This is election season, so that’s where I’m at. Politicians who have been abandoning us for years will begin to return to us with promises of heaven and earth. We must look behind their deception. It’s all about the photo op for them. Take a look around; the public relations work has already begun in earnest.

When politicians express an interest in meeting with me, I always advise them to choose a public location where all members of the press will be present. So that I can express my thoughts as I see them. They come to us in public when they are begging for votes. So, what makes you want to see me in private?

I am neither a hero nor a saint. I am not flawless. I am simply a concerned citizen who wishes for a better Nigeria for myself and other Nigerians. I do this with my voice, my craft, and my platform, and I’ve been heavily chastised for it.

This is my identity. It’s who I’ve always been, even before I became famous. I’ve gone through so much as a result of it, and I often wonder why I’m the way I am. But I’m at peace with myself whenever I think of how many lives I’ve been able to positively affect.