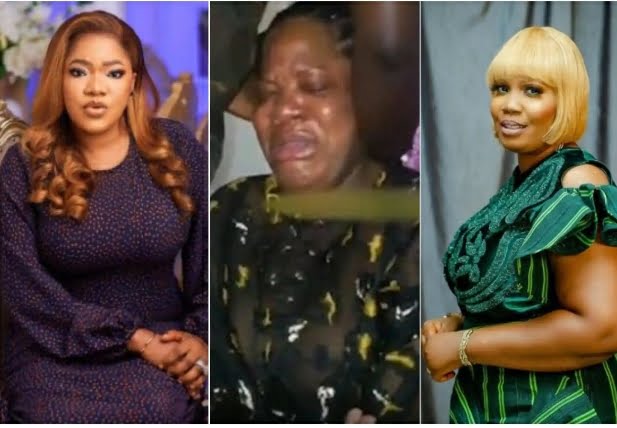 Popular Nigerian actress, Toyin Abraham has taken to social media to cry out over the troubles she is dealing with on set following her encounter with film director, Biodun Stephen.

The mother of one took to her Instagram page and shared a video of herself lying on the floor and being abused by her husband in the movie.

According to Toyin Abraham, her director and producer wanted to kill her on a movie set after they asked her to hold her breath for two minutes.

@biodunstephen My director and @vincentokonkwo my producer wants to kill me on this set, imagine her asking me to hold my breath for two minutes… Filmmaking work no easy ooo, Mi o le wa ku @babarex0 the wife beater.

In other news, reality TV stars, Teddy A and Bambam have opened up on their marriage and the build-up to them officially becoming husband and wife.

Teddy and Bambam become romantically entangled whilst in the Big Brother Naija house and after the show had concluded their relationship waxed stronger and decided to solidify their bond by tying the nuptial in a flamboyant traditional and white wedding ceremony in Dubai.

In a recent interview they granted, the celebrity couple revealed that they were not in good terms prior to them getting engaged. Bambam debunked the allegations that Teddy married her because of her pregnancy as she pointed to the fact that you cannot tie a man down to marry you because you got pregnant for him if he does not want to marry.