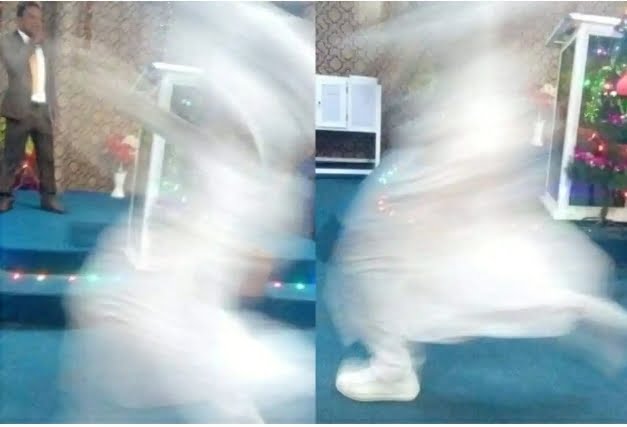 Users on social media have voiced their disbelief after seeing images posted on the internet by a Nigerian pastor who claimed an angel visited his church on the third cross-over ceremony.

The photos and post that went viral on social media sparked debate among social media users. While some mocked the post, others questioned how cameras could capture spiritual things.

According to IGTV Sahara Reporters, Kelvin Ugwu, a man of God, took to his social media page to reveal that as the church was holding its 31st cross-over service, an Angel of the Lord came to visit at exactly 12:13 a.m.

“THIS IS DOUBLE WONDERS INDEED,” the preacher writes in his post. On Friday, December 31st, at precisely 12:13 a.m., an ANGLE was captured on camera during our cross-over Night. I have never seen anything like it since I was born. We are living in a time of enormous WONDER.

“Thank you, Jesus, for this is God.” For your wonderful visitation and double wonders in Porto Novo’s Faith Foundation Ministries. Benin is a country in West Africa. Fr Kelvin Ugwu, Ekuma Uche Philips, Igbere TV – IGTV Sahara Reporters God, this is fantastic.