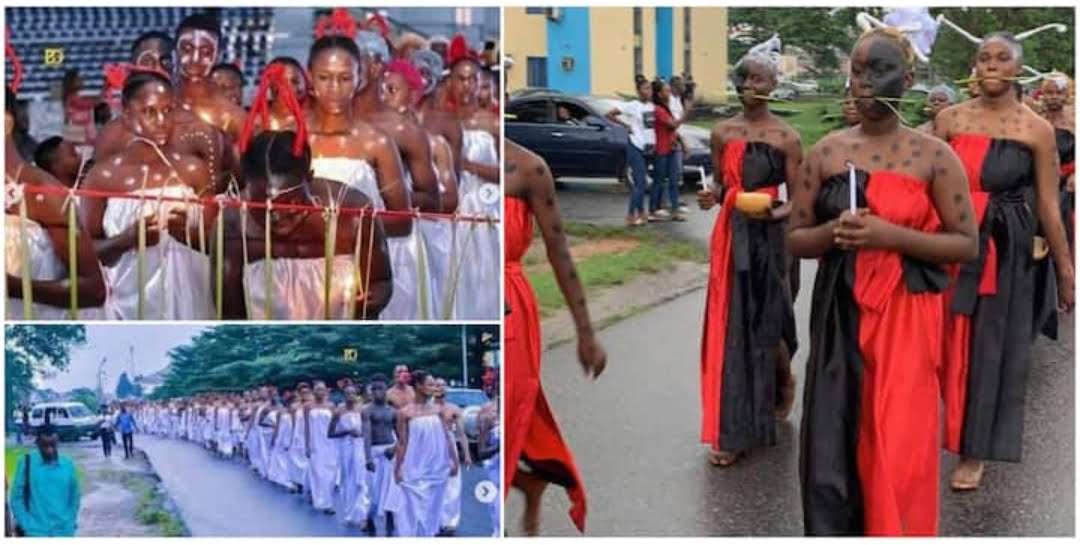 On social media, images from an induction ceremony at Rivers State University have elicited conflicting emotions.

Freshmen from the department of theatrical arts were photographed in ritual-like garb as they marched across the campus grounds.

While some Nigerians praised the tradition, which has become an annual occurrence on many university campuses, others expressed concern that it is an initiation ceremony.

The internet has gone crazy about the clothes worn by Rivers State University theatre arts department freshmen during their induction ceremony.

A user named Timi Terry Doingz published photos from the event on Facebook, praising the department’s president for organizing the event.

In their strange clothes, the freshmen staged a parade throughout campus.

Wrappers were worn by both men and women. While some wore white wrappers, others wore something similar with red and black blended colors.

The students wore white chalks on their bodies, while some wore black, similar to the outfits worn in fetish depictions in Nigerian films.

In another shot, a group of ladies dressed in black and red wraps put palm fronds between their lips while holding black chalks.

Social media users share their thoughts on the event.

@duniyaisrael stated: “It all started in UI. Initiated by the then HOD, who is an Ifa worshiper. UI had to review the exercise at some point and removed some element of the initiation that are questionable. My advice to Parents of such students is that there is more to it than meets the eye (induction). Parents should stand against it.”
@_perez94 wrote: “What do you mean initiation? Black people have been conditioned to think anything black is automatically bad and anything white is the way. If they were holding Qurans or bible would you have called it initiation ? What’s wrong with ya?”
Share This Post On WhatsApp, Facebook, Twitter, Instagram & Telegram