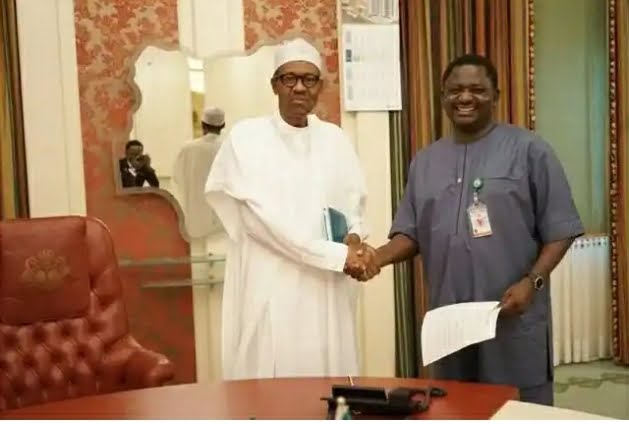 Special Adviser to the President on Media and Publicity, Femi Adesina has averred that President Muhammadu Buhari has strived to improve the state of Nigeria better than he came to meet.

He slammed Buhari’s opponents, arguing that his boss has accomplished a lot in agriculture, security, infrastructure, and the petroleum business, along with many other things.ADVERTISEMENT

According to Adesina, the government has restructured security in such a way that “bandits, terrorists, and insurgents have been put on the back foot,” with the military being strengthened.

Taking to his Facebook page, he came at the critics of Buhari’s administration.

He wrote, “As you read this piece, President Muhammadu Buhari and his team are in the French capital, attending the Paris Peace Forum, a gathering of about 30 Presidents and head of governments from around the world. The Nigerian leader is among the few that were asked to deliver a speech.

“On Wednesday afternoon, we had been at the Palais Elysee, the seat of the French government, where President Buhari paid an official visit to President Emmanuel Macron, who himself had been in Abuja in 2018. Impressive is a mild word to use for the spectacle.

“Earlier that Wednesday, President Buhari had been at the Shangri-La Hotel, to give a keynote address at the Nigeria International Partnership Forum, put together for Nigerian and French investing community.

“Now, the narrative that some people have labored to paint over the years, either out of hatred, or cheap political reasons, is that nothing was happening in the country, other than wanton killings and massive insecurity. They trumpet and magnify insecurity to the exclusion of any other thing.

“Yes, Nigeria battles grave security challenges like many other countries, particularly in the Sahel region, but then, many other good things are happening, while evildoers are also being given a pounding by agencies of state.

“Mr President spoke to the galaxy of Nigerian and French business people and investors, to a massive applause. And what did he say?

“The government in Nigeria was on the right path to achieving multi-sectoral progress. It has re-assessed and updated the national security strategy, which has contributed to success in fighting insurgents and terrorists, and also countering violent extremism.

“Still firing from the hips, Mr President told his audience that there was a link between modern infrastructure and the overall economic development of a nation, ‘hence the massive infrastructural expansion programme we have been executing in various sectors.’

“He gave examples such as railways, seaports, roads, renewable energy, housing, and many others.”

After reeling out some projects which he credited to the Buhari administration, Adesina said, “Which will the wailers, caterwauling all their lives point to, and deny its existence? Yet they keep repeating like broken gramophone records that nothing was happening in the country.

“The truth is that no single government will solve all the challenges of a country in its life span. It will do its level best, and yield space for others to continue. Muhammadu Buhari has touched Nigeria in diverse ways. Our armed forces have been equipped, trained and motivated like never before. The economy has successfully been diversified, after more than five decades of lip service.

“Corruption is being robustly fought, stealing is something to be abhorred. And Nigeria is being rebuilt. Projects, projects everywhere, with a good number of them slated for commissioning next year.

”The apostles of ‘nothing is happening, except insecurity’ should look for other music to sing, and for other dance steps. Honest Nigerians can see and feel the good things happening. It was unfolded to Nigerian and international investors in Paris on Wednesday. Those who have consigned themselves perpetually to the complaint counters should wake up. The market is over. It is time to go home, and do something better.”