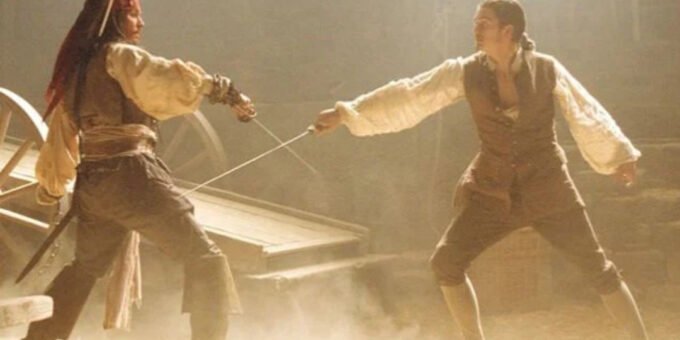 If hanging out with Captain Jack sounds better than being marooned at home with nothing to do, here’s what order to watch Pirates of the Caribbean in.

If you’re looking for a marathon to help fend off boredom, there are so many great film series that you can dive into. Across social media, we’re seeing plenty of people gathering snacks and preparing to watch the likes of Harry Potter, The Lord of the Rings, The Hobbit, Star Wars, Transformers, Back to the Future, Jurassic Park and more in their entirety.

It all depends on taste, but if swashbuckling and Johnny Depp are more suited to yours, a binge of Pirates of the Caribbean is definitely more alluring.

When the first film – The Curse of the Black Pearl – first released back in 2003, it’s clear that a phenomenon was born, and undres, it was.

Arguably, we haven’t seen a more satisfying pirate movie surface beyond this franchise since, which is why it’s always worth returning to from time to time.

Under the current circumstances, there’s no better time to spend the day chronicling the entire adventure…

If you’re planning to binge the Pirates of the Caribbean film series, here’s the order to watch it:

So, there are five films in total, making for a lengthy but extremely satisfying marathon.

Critics and audiences tend to argue that the film series gradually declined as it went along, but nevertheless, they all achieved significant box-office success.

Generally, the first instalment is regarded as the best of the bunch, but we’d actually have to disagree.

We’re sorry, but we can explain.

The first one is a terrific film, of that there’s no doubt. However, the second one really benefits from losing itself further in fantasy.

Bill Nighy is spectacular as Davy Jones, and it’s quite a fascinating experience to become immersed in the microverse which is the Flying Dutchman. As for the other characters, we’re already well and truly acquainted with them thanks to the predecessor, so we understand their motivations and personalities much more which adds to the tension, fuelling the love triangle and romantic elements perfectly.

As for action sequences, the Kraken assault is possible the most impressive set-piece of the entire franchise and remains absolutely breathtaking on repeat viewing.

With the first film, we understood that this was an exciting world, but Dead Man’s Chest takes the more outlandish elements and runs with them, bringing in exciting new characters while still devoting time to the ones we’ve already grown attached to.

As an adventure film for the whole family, it’s simply sublime.

Pirates of the Caribbean marathons commence!

A number of audiences have flocked to Twitter to announce that they’re embarking on Pirates of the Caribbean marathons. So, if you’re contemplating it, you’re certainly not alone.

Check out a selection of tweets: