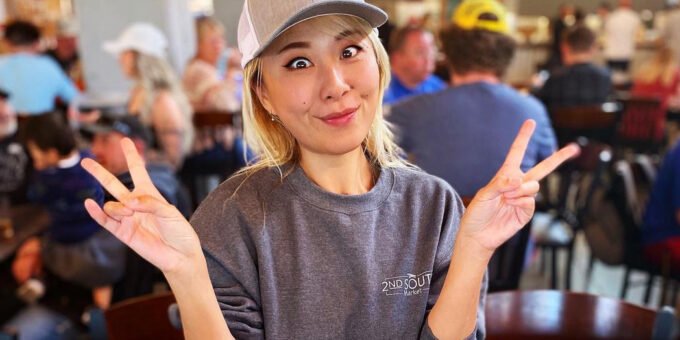 Raina Huang was born on 20 October 1994 under the zodiac sign of Libra, in the United States, however, the actual place of her birth is undisclosed. She is a 26-year-old social media star and YouTuber, but probably best recognized for being one of the most popular female competitive eaters in the whole world. She has amassed almost 500,000 subscribers on her official YouTube channel, while her videos have been viewed over 90 million times. She also has more than 1.9 million followers on her official TikTok account, and is also active on Instagram and Twitter.

Precisely, who is Miss Huang? Despite her expansive social media presence, many of her fans do not know much about the YouTuber, for instance, her age, relationship status, and much more. Her biography here will provide an in-depth look into who she is.

Raina Huang spent her early years somewhere in the US, raised by her parents but about whom she remains silent when it comes to their names and professions. Nonetheless, it’s known that she has a sister, but her name hasn’t been revealed either. Raina holds American nationality, and belongs to an Asian ethnic group. Regarding her education, Raina has never shared any details about it, except that she is fluent in Mandarin Chinese, Japanese and Taiwanese as well as English.

Raina Huang has made a name for herself on the social media scene partly thanks to her love of food.

She became active on YouTube when she came up with the idea of creating a cooking channel, to share that love with others. She launched her official self-titled YouTube channel on 27 February 2010, and her career officially began a day later, when she uploaded her debut video entitled “How to Make a Cheese Omlette”. She continued to make cooking videos until she transferred to gaming channel, and started posting gameplay videos. However, since she didn’t have much success at the time, she quit that and became inactive in the summer of 2014.

Raina Huang returned to her YouTube channel after beginning filming food challenges in which she participated under the influence of her co-workers, who suggested it, since she could eat more than most people.

She decided to give it a try, and after a couple of fails, she won. Her first challenge video, entitled “Spicy Noodle Challenge | Korean Noodle packs x5 | RainaisCrazy”, was uploaded in August 2017. That brought her tens of thousands of views, and encouraged her to continue with food challenges and other similar content. She quickly became known as a competitive eater, and her channel took off after she competed the In-N-Out 50×50 challenge in 40 minutes, and broke the world record, since when the number of her subscribers has been constantly growing. She also won the Pabst Blue Ribbon Pizza Eating Challenge at Oozefest 3, when she ate 16 slices of pizza in 10 minutes.

Some of her most popular videos include “7lb Pho Eating Challenge | Pho Ha #7 in Riverside | RainaisCrazy | Oliver and Pearl’s Engagement”, “UNDEFEATED BACON ANACONDA BURRITO CHALLENGE | 2nd Challenge on the Same Day | RainaisCrazy”, and “10lbs of SEAFOOD CHALLENGE!!! Can I eat all this?! #RainaisCrazy”, to name a few.

What is Raina Huang net worth?

Her net worth is approximately $1.5 million. She has made her fortunate primarily from her YouTube channel. She also does product endorsements, which is a gig that attracts an incredible income as well.

The YouTuber is undoubtedly gorgeous and would certainly turn necks. But is Raina competitive eater married? She is not married, and she is probably single. However, she was in a romantic relationship before. Unfortunately, not much about Raina Huang boyfriend is known.

She enjoys an incredible following on various platforms. Her Instagram page (@rainaiscrazy), for instance, has 201k followers.

She is also present on Facebook with 13k followers and TikTok with 1.7 million followers. With the hashtag “Rainaiscrazy”, she has created numerous pieces that she posts on her social media accounts.

Raina Huang is one of the famous American competitive eaters. She makes videos of herself doing food challenges and posts them on her social media platforms. As a result, she has attracted a massive following.

READ ALSO: Tiny Texie biography: what is known about the adult entertainer?

Legit.ng recently published an article on the biography of Tiny Texie. Texie is a famous American social media influencer, TV personality, and dancer.

Her journey to fame began when she started participating in beauty competitions in 2015. She became even more famous for her videos on TikTok and Instagram, and she currently has millions of followers on her social media pages.