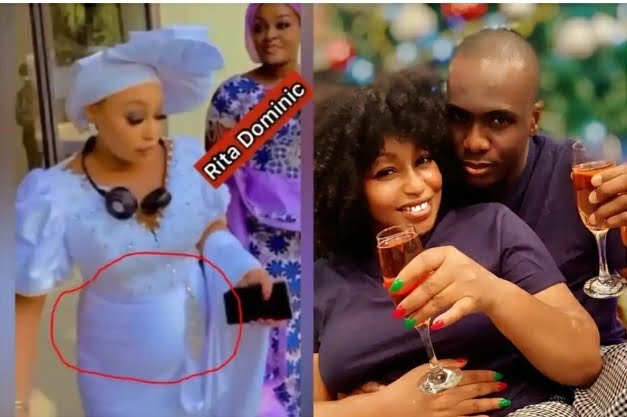 Delectable Nollywood actress, Rita Dominic has sparked pregnancy rumors as she has been spotted with a baby bump in a new video on social media.

Rita Dominic showed up at the burial ceremony of her mother-in-law in Umueri, Anambra State and she was also accompanied by some of her colleagues, Chacha Eke, Queen Nwoko, Destiny Etiko, Jr Pope, among others.

In a video of Rita Dominic dancing, a look at her tummy area showed a bump, however, although she has not confirmed that she is indeed expecting a baby, fans alluded that she is pregnant for her fiancé and they have expressed excitement over her new imminent success.

`Screen Goddess @ritadominic on her way to motherhood? We couldn’t help but notice the cute baby bump while she was at Umueri, Anambra for the burial ceremony of her Mother-in-law, along with some of her Nollywood colleagues, @destinyetikoofficial @chachaekefaani`

A few weeks ago, Rita Dominic has advised her fans on social media to stay away from people or companies who don’t do the right thing.

Contained in a tweet, Rita Dominic bemoaned that there are some companies who don’t appreciate peaceful people and you can sense they are bad to work with.

According to the celebrated movie star, such companies or people often lie and cut corners just to get ahead and she advised those who are mistakenly working with them not to let them be bullied by them.

You could sense that Rita Dominic is talking out of personal experience here and a lot of her fans agreed with her on this.