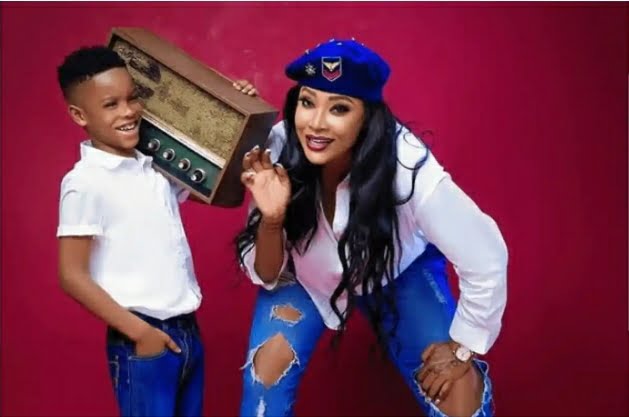 The Nigerian movie industry has produced a lot of brave and beautiful women who have been great mothers to their children. Some of the Nollywood actresses have beautiful daughters and handsome sons well trained and single-handedly groom by these actresses.

There are some Nollywood actresses who are single mothers who have single-handedly groomed their wards into becoming what they are.

Queeneth Hilbert is a 29-year old actress who has been featured in several movies and has also acted alongside other popular Nigerian actors and actresses. She has a son called Clinton and is currently 6-years old.

Nollywood actress Mimi Orijiekwe is now a single mother after her marriage with her first husband Charles Bullion crashed in 2019. The two were seen on different occasion throwing shades at each other. Mimi has a beautiful 4-year old daughter whom she takes care of.

Angela Okorie is a Nigerian actress who is also an artist. Angela Okorie and Chukwuma were married from 2006 to 2016 but got divorced. It was later rumored that her new boyfriend proposed and got married to her but she later debunked the rumors saying that the charade was all for the hype of her new music.

Our favorite Nollywood thespian of global recognition, Genevieve Nnaji has a beautiful daughter who is of age and is now married. It was reported that she had her when she was at a very tender age but pulled through school with the help of her mother.

One of the popular actresses in the movie industry is Tonto Dikeh. She is a single mother who is now in a fresh relationship. She got divorced from her husband Olakunle Churchill in 2019 and has single-handedly catered for her son King Adrea.