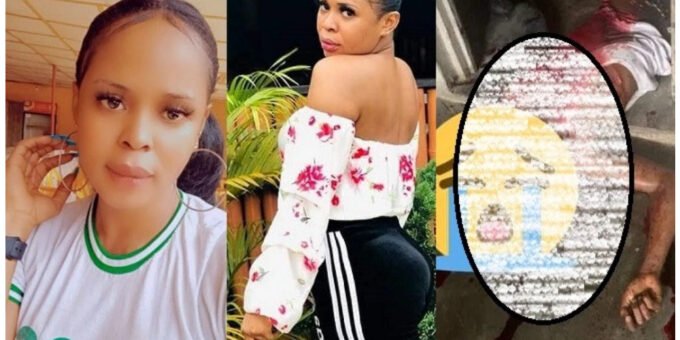 A beautiful young lady in the NYSC serving in Uyo, Akwa Ibom state is currently in custody of the police after she hacked a man she hooked up with to death and was caught instantly while trying to escape.

According to multiple reports online, sources says the incident occurred in the early hours of today around Abak road Akwa Ibom state. The corp member named Odume Princess Paschaline, a graduate of University Of Nigeria, Nsukka hacked a man she hooked up with to death with a machete and was caught with bloodstains all over her while trying to escape by jumping the fence of the building.

Eye witnesses says she hacked him to death with a cutlass as there was cuts on his stomach and faces. She was caught with bloodstains trying to escape and was caught instantly and beaten to stupor. The report was first brought to notice online by a Facebook user “Godwin George” before it went viral.

Odume Princess Paschaline hails from Udi in Enugu state and she is currently in the NYSC serving in Uyo, Akwa Ibom state.

Check out some of her photos slaying and flaunting her beauty before she was caught escaping with blood stains after killing the man she allegedly hooked up with:-

While the lady was beaten and dragged around, Okada men around the area claimed the lady has been sending them to buy her weed ever since she came to the state for her service.

For now, no statement concerning the matter has been released by the police where she is being held at but we will continue to update you as the story unfolds.

This should be a lesson to many people who hook around with people they don’t know anything about and might have another mission in hand. Stay safe and be vigilant everyone.