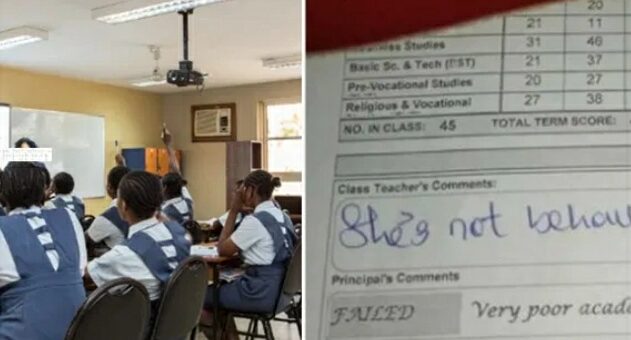 A teacher’s blunt remark he appended on the report card of a student has caused a furore online as several people literally call for his head and blood.

The Principal also penned this in his remark section; ‘Very poor academic performance.’ A Twitter user identified as @TheIgbowolf shared a photo of part of the report sheet with the caption; ‘This is so wrong.’

This is so wrong

See some of the mixed reactions we gathered below;

Setmike wrote: For a student with such performance 2 A’s, 2C’, 2P’s and 1F and tge teacher deemed it fit to say she doesn’t behave like human being? That teacher is a disgrace to teaching profession. Even with the teacher’s comment it shows the girl is brighter than her teacher. Period.’

Natasha: ‘I don’t think that comment is in relation to her grade. It’s about her behaviour in class. Not saying I agree or disagree with the comment I don’t know what the student did. But, if for example she does weird stuff like bite people randomly, then the comment is justified.’

Shegelulu: ‘Let them say the truth..so you can pay attention and monitor/ do the needful before things get out of hand. But they should have called the parents and tell them this in person.’

Ncyma: ‘You can call the parents and tell them that their child isn’t doing well or is behaving inappropriately with instances or proofs and not saying a child is not behaving like a human being.’