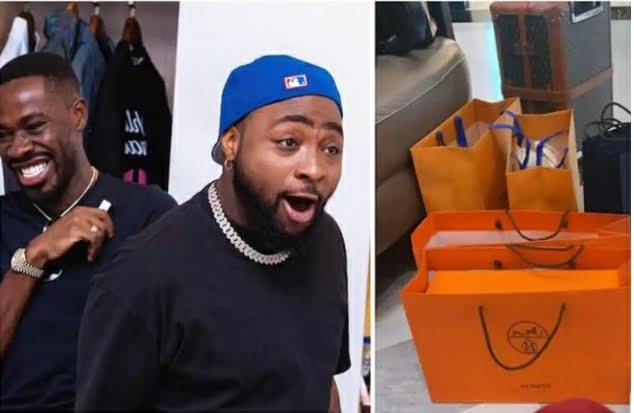 Davido has once again asserted his authority with the lavish items he loves to have at the disposal of his 30BG Crew members.

Taking to his Instastory story, Davido shared videos of himself at a high-end luxury boutique in Morocco, as he explained that the shopping spree was part of a therapeutic thing for him.

Among the crew members spotted in the video were, Davido’s lawyer, Bobo, Tunegee his cousin, and manager, Asa Asika.

Davido bought everything his team set their eyes on that was pleasant to them. He is known to be a giver who stops at nothing to make sure his team does not lack in anything be it material possession or otherwise.

In other news, Nigerian football legend, Austin Jay Jay Okocha has stated that he did not conduct any study prior to joining Bolton Wanderers in 2002 from Paris Saint-Germain.

When Okocha departed French Ligue 1 powers PSG for Bolton Wanderers in the Premier League nineteen years ago, he startled many football fans.

Even though PSG was not a major team at the time, Okocha’s departure for Bolton Wanderers, who were fighting relegation in the Premier League at the time, was surprising.

However, Okocha has admitted that he was unaware of Bolton’s Premier League reputation before signing with the club, and that it took him a long time to adjust.

He said: Well, I will say that it’s obvious I didn’t do my research before signing for Bolton, “But as a football person, you know football comes first, not the city, not the lifestyle that comes with the City.”