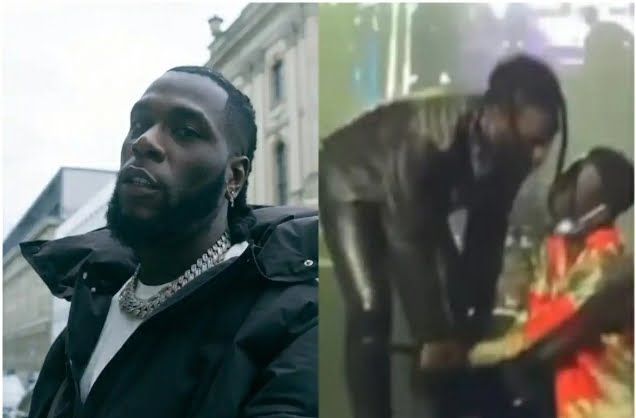 A fan who was violently thrown off the stage while mounting the podium after Burna Boy‘s thrilling performance has sworn to keep the shirt he was wearing at the time of the incident for the rest of his life.

A fan rushed on stage and grabbed Burna’s leg during a recent concert, but the singer angrily threw him off before he could have the upper hand and advanced on the stage.

The small child claimed in a video he posted on his Instagram page that he hasn’t taken off his shirt since the African Giant pushed him, which he has constantly kept as a souvenir.

He said that he is an up-and-coming talent who took advantage of the opportunity to catch the notice of the African Giant, but that things did not go as planned.

He shared his video writing with others.

Because I want to perform on stage, Burna Boy pushed me all the way. My name is OldSoldier, and I am a musician who performed at the Eko Hotel live. Please share it with your friends and family because they will not give my glory to anyone else. I’m looking for supporters.