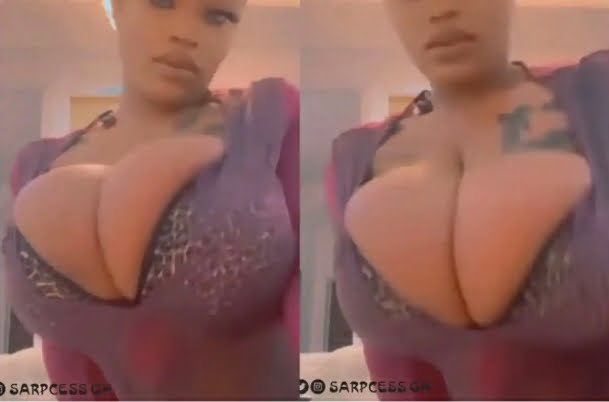 A slay queen has caused males on the internet to have their lusty imagination running wildly in circles after she flaunted her massive ‘front’ on Instagram.

Perhaps she wanted to give netizens a big souvenir for the weekend and send a subtle reminder to those who belong to the Papa No bracket that she’s readily available for the taking.

We have no idea what underlined her motive but we can’t deny the fact she really has something sumptuous going on there on her chest which is pleasing to the preying eyes.

Meanwhile, in another relationship conundrum we have sighted on Naijaaparents, a woman has shared with the internet community how she discovered that her husband actually has a sie chic and has proceeded to purchase a whip for her.

Please hide my identity before you post this. I am really very sad as I write to you. I have given up all my life just for this man, his people and my kids but I can say that I have nothing to show for it. I met this man when he had nothing.

I always passed his shop on my way to shop and we always exchanged pleasantries. We later got close and then things were not very rosy for him. He had just finished learning that job and he was not really getting enough customers as he expected because he was starting anew.

Because of this, he was usually idle and sometimes he would walk down to our shop since he was on good terms with my madam. Everyone knew him and all. Sometimes he couldn’t even feed and it was obvious. He was always yawning and he even began to lose weight at some point in time. However, he was a nice person so I would bring food for him sometimes on my way to work. Read more here.