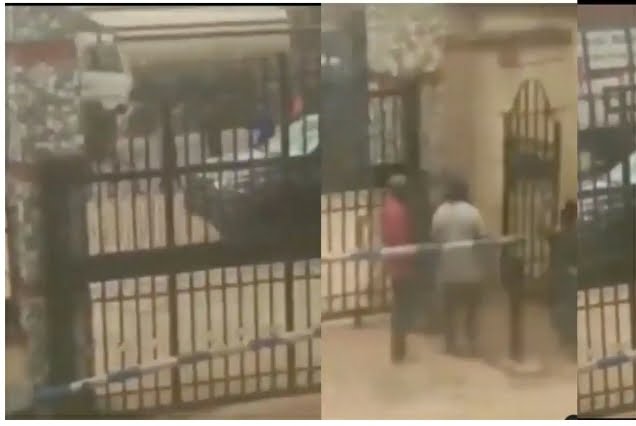 In a viral video, soldiers can be seen at a nursing school in Ihiala, Anambra state.

After a gun battle at an APGA gubernatorial election event in the village, military forces reportedly invaded the school in pursuit of gunmen.

Residents passing by the school were spotted lifting their hands to demonstrate that they did not carry a weapon. Students from the school were also seen rushing before a gunshot was fired at one point in the footage.

See how netizens reacted to the video:

emeka_junior01 wrote: How many times una don storm school for not in search of bandits and boko haram? I no know waitin we do una for this country oh

onyekavalent wrote; What are soldier’s doing inside a nursing school for Ladies, for God’s sake this people are meant to protect lives not torment it.

In other news, on Tuesday, October 12, a High Court in Minna, Niger State, ordered Alhaji Mohammed Barau Kontagora to stop claiming to be the 7th Sarkin Sudan of Kontagora.

On Wednesday, October 6, the Niger State Government named Mohammed Barau Kontagora as the Seventh Emir (Sarkin Sudan) of Kontagora. The decision came after the court heard an ex-parte motion filed by 15 candidates for the throne.

JMK, a reality TV star, shares the important lesson she learned after narrowly avoiding being burned alive in a house fire.

After I became pregnant in college, my father withdrew all financial support from me – Actress Adunni Ade

After I became pregnant in college, my father withdrew all financial...

For the year 2021, Burna Boy is the most streamed African...

‘Falz And Toke Are Just So Funny’ – Reactions To Falz’s...