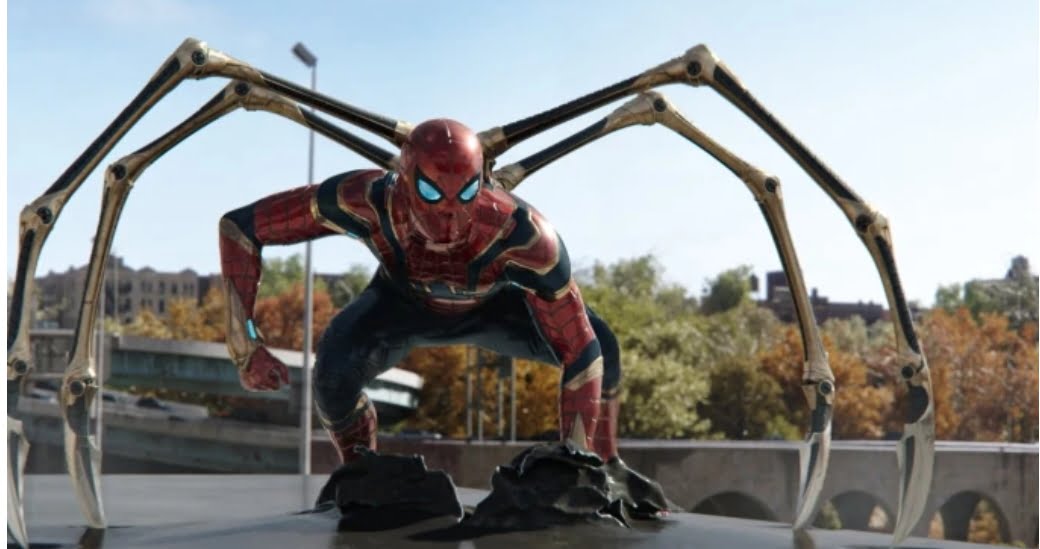 The second trailer for Spider-Man: No Way Home, which was debuted at a live event in Sherman Oaks, Calif. on Tuesday and included a surprise Q&A with star Tom Holland, introduced a multiverse of adversaries. Doctor Octopus, Electro, Sandman, the Green Goblin, and the Lizard were among the villains featured in the trailer, which brought together more foes than any previous Spider-Man movie.

Fans sang “Sunflower,” the iconic song from Spider-Man: Into the Spider-Verse, and others did the classic dance performed by Tobey Maguire in Spider-Man 3, which has become one of the more meme-able moments from his Spidey trilogy, at the trailer premiere event at the Regal Sherman Oaks.

Holland plays Peter Parker/Spider-Man, while Benedict Cumberbatch portrays Doctor Strange in No Way Home. It picks up after Spider-Man: Far From Home (2019), which ended with the world discovering Spider-secret Man’s identity and the villain Mysterio (Jake Gyllenhaal) framing him for murder. In No Way Home, Peter Parker asks Doctor Strange to cast a spell that will make the world forget his secret identity, only for things to go wrong and open a portal to the multiverse. This opens the door for villains from earlier Spider-Man films to make cameo cameos, such as Doctor Octopus (Alfred Molina), Electro (Jamie Foxx), and The Green Goblin (William Dafoe), bringing together the Toby Maguire (2002-07) and Andrew Garfield (2002-07) episodes (2012-14).

The inclusion of so many adversaries from earlier “Spider-Man” films has led fans to expect Tobey Maguire and Andrew Garfield, who previously played the iconic web-singer, to appear as well. However, while the clip confirmed that Molina’s Doc Ock does not think Holland is Peter Parker, Maguire and Garfield were absent.

Holland did appear to allude at such a scene in the film during a global fan event in Los Angeles to debut the “No Way Home” teaser, referring to shooting a “genuine moment in cinematic history.”

As the audience in the auditorium murmured, Holland remarked, “We were there on the day making it happen, and it was crazy — and I would love to tell you.” Holland did not go into specifics, but he did say that when Marvel first pitched him the film, he said, “That’s never going to work.” There’s no way you’ll be able to complete that task.’ And they succeeded.”

While Holland did not reveal any major plot twists, he did mention that the film’s most difficult moment to film was a “35-beat” combat scene between Peter and one of the antagonists that took days to film and left his knuckles bloody.

“In this film, you’ll see a style of fighting that you’ve never seen in a Spider-Man film before,” Holland added. “These bouts were supposed to shock you guys, to put you on the defensive.”

Holland, now 25, was overcome with emotion as he tried to recount the story of when Marvel Studios CEO Kevin Feige contacted him when he was 18 years old, and had to turn away to compose himself, saying “fucking hell” as the audience cheered him on. After a brief pause, Holland waxed lyrical about “No Way Home,” describing it as “the most cinematic and theatrical superhero movie that has ever been made.”

“Trust me when I tell that that is the tip of the iceberg,” Holland remarked of the trailer.

Marvel Studios is preparing for the next era of Spider-Man with the announcement of “Spider-Man: Freshman Year,” an animated original series. The series will cover Peter Parker’s early web-slinging escapades before “Spider-Man: Homecoming,” but there is no formal release date yet.

Only on December 17th, “Spider-Man: No Way Home” will be released in theaters.